What Are the Different Skiing Events at Winter Olympics 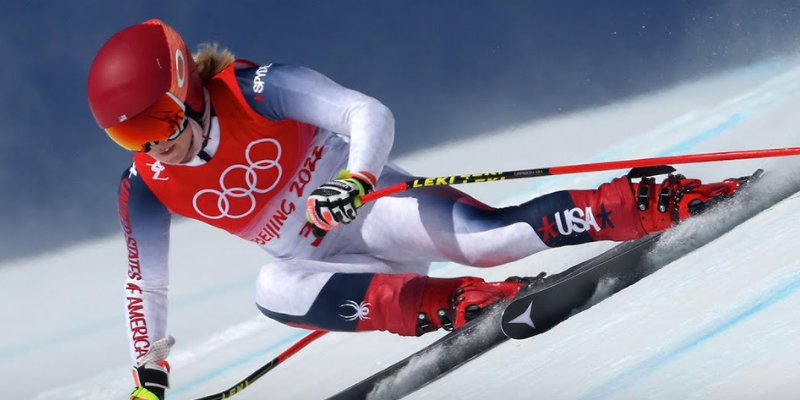 The 2022 Winter Olympics in Beijing featured six alpine skiing events, six freestyle skiing events, and six cross-country (or Nordic) skiing events. Each of these has men’s and women’s versions, and they are some of the most popular events at the games.

I’ve always loved the Winter Olympics, and they have influenced me heavily as a skier over the years. The skiing events have changed and evolved throughout the history of the games, and I’ve researched which are currently in place.

I’ll list each one of the Olympic skiing events in this post and provide you with a brief description of each. Most people can’t list all of these, so I wanted to write it all out for anyone who is interested.

Alpine skiing is also known as downhill skiing, and it features some of the most storied and established events.

Slalom skiing is a timed ski race where skiers must navigate through a series of gates. Each skier takes two separate runs, and the gates are changed between each run. The combined time of these runs is the score for the skier, and the fastest time wins.

Giant Slalom, or GS, is one of the fastest skiing events in the Olympics and is always a crowd favorite. It’s scored in the same way as slalom with two timed runs and the winner having the fastest time. GS runs are steeper and longer than slalom, making them faster overall.

Super-G is kind of like a mix of slalom and GS. The difference is that there is only one run, and it is a lot longer than other downhill alpine racing events. This event can also have high speeds and is very exciting.

Downhill is the fastest skiing event at the Olympics. These races are the longest of all the alpine events, and skiers can reach speeds approaching 100 mph. This is a very exciting race to watch and demands extreme skill and precision from the athletes.

Alpine Combined mixes both slalom and downhill, taking the times of each run and adding them together. This event can show a skier’s versatility in multiple disciplines and racing styles. Learn more.

This is a newer event that debuted at the 2018 Pyeongchang games. Two women and two men from each country race against each other in pairs. It’s a bracket-style tournament, and the head-to-head nature of the races is very exciting.

Freestyle skiing is more modern than alpine, and these events represent the evolution of the sport over the last several decades.

Moguls was the first-ever freestyle event and is still going strong. Athletes navigate a mogul course that has jumps built-in. The winner is judged based on a combination of their turning ability, time, and jumping skills.

Aerials is a high-flying event that is kind of like gymnastics on the snow. Skiers launch themselves of huge jumps and do complex aerial manuevers. The winner is decided by a score resulting from their form, takeoff, and landing.

This is the newest Olympic skiing event and also one of the most popular. Athletes launch themselves of a single huge jump while attempting extremely complicated tricks in the air. Judges decide a winner based on difficulty and successfully landing the jump.

Half-pipe is another relatively new Olympic freestyle event involving skiers navigating a manmade halfpipe made of snow. The winner is chosen based on a scoring system given out by judges based on the difficulty of tricks attempted and completed landings.

Slopestyle involves skiers hitting multiple features in a terrain-park-like environment. This is a creative and high-flying event that is a fan favorite and a lot of fun to watch. Winners are decided by judges awarding points for difficulty, form, and landings.

Ski Cross is a head-to-head event that puts multiple skiers against one another as they zoom down a run filled with turns, jumps, and other obstacles. This is another exciting and fun event to watch live.

Cross country skiing events may not get as much attention as alpine or freestyle, but they still require a lot of skill and determination from the athletes. The men’s and women’s events are a bit different.

This is a 15km race for men and a 10km race for women using the classic Nordic skiing style. The best time wins the race.

This is a 15km for men and a 7.5km race for women involving both classic and skate style skiing. Learn more.

This is a 50km race for men and a 30km race for women where all skiers start simultaneously, and the first one across the finish line wins.

This is a short but fast race where athletes use freestyle skiing technique to go as quickly as possible over a 1.5km course. There are several heats to the event.

This race includes a mass start where two skiers from each country complete six laps on the sprint course using classic ski technique.

This is a 4x5km for women and 4x10km for men relay-style race where four different racers from each country complete the course as fast as possible.

As you can see, there are a lot of different skiing events at the Olympics. Chances are, you aren’t familiar with all of them, so try to catch a new event so you can learn something new and see just how skilled all of these athletes are.