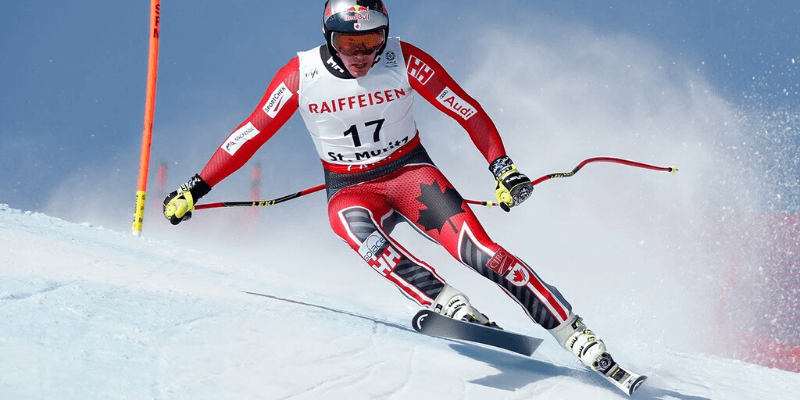 There are many different style variations within the sport of skiing. These differences have all evolved from the Nordic skiing style first created thousands of years ago as a means of transportation in northern environments.

Today, alpine skiing is more popular and well-known. That goes for both recreational and competitive events.

Super G and Downhill skiing are two popular competitive alpine styles. As they have so many similarities, many assume they aren’t that different.

While that’s true to a certain extent, this article will show what makes them unique.

The Winter Olympics are the ultimate form of competitive skiing. While there are other popular events that happen in the down years between the world stage, including the FIS World Cup, nothing compares to the snowy games.

The Winter Olympics have many different skiing events. When it comes to downhill disciplines, there are two main classifications: freestyle and alpine.

Freestyle skiing involves many newer styles such as moguls, slopestyle, and halfpipe. All of these events involve aerial maneuvers and other techniques that are judged on elements such as landings, form, and flow.

Alpine skiing events include the two we will look at in this article – Super G and Downhill. These events are typically competitive races where the main goal is speed.

The winner of the competition is the skier who completes the course in the fastest time without falling or missing any of the established gates that tell them when and where to turn.

Let’s take a look at downhill skiing first, as it’s pretty easy to explain and one of the most exciting events to watch if you like fast skiing.

The basic aim of the downhill skiing event, as the name implies, is for a skier to get down a run really, really quickly.

That makes it a great spectator sport because it allows you to witness some of the top skiers in the world going at full speed. It’s a miracle when they don’t lose control.

However, there’s more to it than just heading straight down a ski run as fast as possible. Skiers must also navigate a series of gates that are set up telling them where to turn.

Every downhill course is a bit different, but in addition to gates, skiers will also need to navigate various terrain features such as bumps, drop-offs, and slope changes. That then adds excitement and variation to the course.

All of the rules and regulations for official downhill skiing are put in place by the International Federation of Skiing, also known as the FIS.

The basic rules for the downhill event dictate that a Men’s course must have a vertical drop of 800 to 1100 meters for Olympic, championship, and World Cup events.

A downhill course must also have gates that have four slalom poles and two flags. The flags need to be either red or blue in color and at least eight meters wide.

The exact number of these gates on a course can vary from location to location. Downhill skiers must ski through each of these gates for their run to count.

Downhill skiing involves just one run. That’s quite different from many other events where skiers get several attempts to earn the best score.

There’s no score or judges in downhill skiing. The fastest time wins. It is an individual sport where one person wins.

Super G skiing is another competitive event based on speed. However, it’s different from downhill because it involves elements of Giant Slalom skiing.

Super G is still classified as a speed event and the fastest skier who completes the course while passing through each gate wins.

Even though Super G is still a speed event with similar rules to downhill, there are more gates to pass and turn through.

That makes it much more focused on technique and turning elements in addition to speed. A skier still attempts to complete the course as quickly as possible, but they need to make more turns overall.

That then makes it much slower than downhill.

The rules and regulations set up by the FIS dictate that a Super-G course must have a vertical drop between 350-650 meters for men and 350-600 meters for women.

For more top-level events, such as the Olympics and World Cup, the minimum vertical drop of the course is raised to 400 meters for both male and female skiers.

The course must have gates that are between 8 and 12 meters in width and the distance between those gates must be at least 25 meters.

Each skier gets one attempt to ski down the Super G course and the skier who passes through all gates with the fastest time wins.

The biggest similarity between Super G and downhill skiing is that they each focus on speed. The winner of both downhill and Super-G events are the skiers who complete the course with the fastest time without missing any gates.

They are also both Alpine skiing events that give skiers one attempt to complete the course in the fastest time possible. That’s different than other skiing events where multiple attempts are allowed.

Skiers wear similar ski clothing and use similar equipment with both events as well. A typical downhill skier wears a speed skiing suit, a helmet, skis, boots, and poles.

They also tend to have some protective gear such as knee pads or small shoulder pads.

Downhill skiing is a faster event than Super G because there are fewer gates for the skier to pass through. The overall length of the downhill course is also longer than a Super G course.

The increased number of gates a skier must pass through in Super G slows them down a bit and makes it a little more technical, even though it is still classified as a speed event.

Downhill skiers will usually use a longer ski that’s better for speed purposes, while Super G skiers want a ski that allows for better turning.

Super G skiers still have a fairly long ski but it will have more of a sidecut that creates a better turning radius.

A downhill racecourse is longer than a Super G course and also has a more significant vertical drop.

Downhill courses also start on a slope in order to create additional speed, while Super G courses begin on a flatter plane that allows for slightly lower speeds. That then creates a focus on technique.

Both Downhill and Super G are amazing skiing events to watch and participate in. If you like to ski fast, both of these events will satisfy your need for speed and give you a thrill that no other ski event can match.

The two events are similar in that they are classified as speed events, but, as the above sections show, they each have a few slight differences that make them unique.

If you’ve never watched these events before, here’s a video of Linsdey Vonn’s gold medal run at the 2010 Olympics to give you a taste of how exciting the event can be!

Have you ever tried Downhill or Super G skiing? What is your favorite Olympic skiing event? Let us know in the comments below!