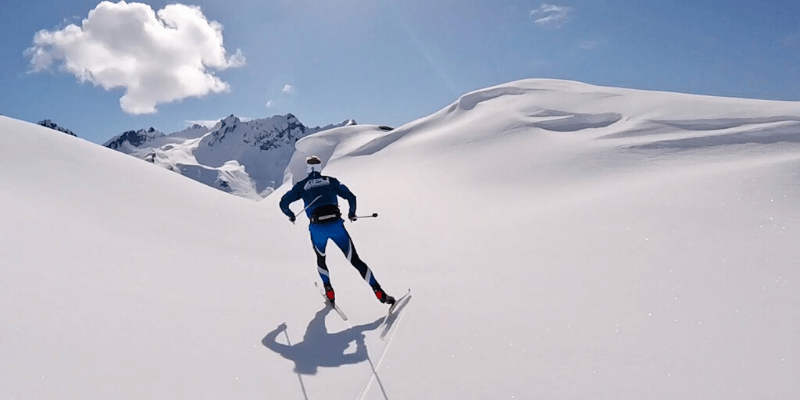 Many people love skiing. It’s a great way to get outdoors during the colder months of the year, provides plenty of exercise, and is extremely fun. For those reasons, the concept of skiing has been around for millennia. Though the technology and styles have advanced over the years, the basic elements remain the same – you put skis on your feet and glide across the snow.

That being said, there are plenty of different skiing styles that exist today. There is even specific gear that you want to get for each style, as well as different techniques and approaches to exploring them. This article is going to look at two of the most common types of skiing, Alpine and Nordic, and explain what makes them unique.

A Brief History of Skiing

Humans have been skiing for a really long time. In fact, evidence in Norway shows that humans were on skis over 6,000 years ago! If you think about it, it makes a lot of sense that ancient humans who lived in harsh winter conditions created tools to help them navigate on the snow. Even so, such rudimentary techniques would have looked pretty wild.

Those prehistoric skiers were more than likely laying down the roots for what we now consider Nordic skiing. This type of skiing has roots based in the region that is now known as Norway, a region the Norse people have called home for thousands of years. Modern and early people in this area long utilized skis to traverse harsh winter conditions, and the Nordic skiing style still bears their name to this day.

Alpine style skiing has a shorter history, but it can still trace its inception to a similar area of the world. An Austrian man named Mathias Zdarksy invented ski bindings out of metal and springs in the 19th century, paving the way for the future of alpine skiing. The invention of bindings is an important milestone in ski history because it is what distinguishes Alpine skiing from Nordic skiing.

Nordic skiing is a style of skiing where the toe of your ski boot attaches to the ski and the heel is left unattached. This style of skiing has been around for a very long time (as described above) and was developed as a means to travel long distances through deep snow. Even though the technology and materials used to build these skis have changed a lot over the years, the basics remain the same.

This style of skiing was the first style. Every other style that we know and enjoy today can be traced back to these Nordic roots. When you’re out Nordic skiing, you utilize long skis and poles to push, skate, and grab through the snow. This is much more efficient than simply walking or snowshoeing, as the ability to skate and glide over the surface of the snow is much faster.

A modern-day Nordic skiing setup includes skis, boots, and poles. A major difference between Nordic skiing and other styles is that you use a soft and flexible ski boot. This boot is warm but lightweight. Nordic skis are also typically longer and far narrower than other types of skis, which allows them to cut through and stay on top of the snow. Nordic skis do not have an edge because they are designed for flat and slightly varied terrain and not intended for strict downhill use.

Many of us modern-day skiers practice Alpine skiing. You may have never heard this term before, but it is synonymous with downhill skiing and is the most common style of skiing you’ll see at most resorts today. Alpine skiing has really taken off in the last 100 years or so, and the advancements of the style have given rise to many off-shoot styles that are also quite popular.

Alpine skiers also need to use skis, boots, and poles, but their design and purpose are quite different than Nordic models. Alpine skis have metal edges on them to cut and carve into the snow, allowing for powerful high-speed turns. These skis also have more shape to them than Nordic skis, which allows for easier turns and enhanced performance.

Alpine ski boots are rigid and sturdy, making them the exact opposite of Nordic style boots. That allows for great edge control and the ability to maneuver in all sorts of conditions. Another major difference with Alpine skiing is that ski bindings secure your entire boot to your skis. That allows for further control under all downhill conditions.

Have you tried both Alpine and Nordic skiing? Do you have a favorite style? Let us know below!