What is Freestyle Skiing? 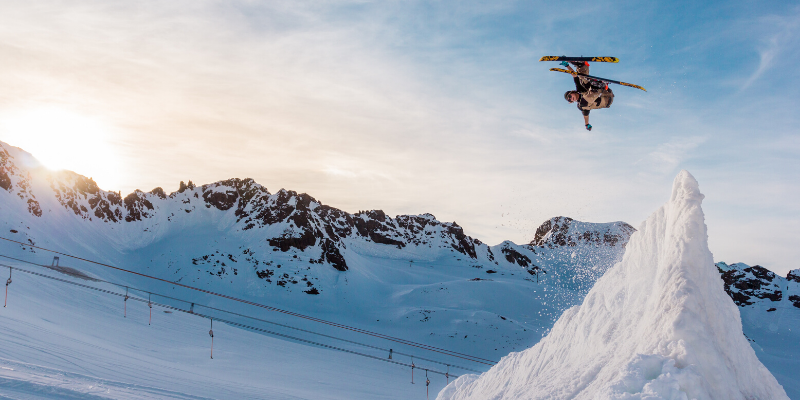 Skiing has come a long, long way from its ancient roots. Once a means of transportation, the sport is now incredibly popular all across the world.

As it is so popular, it has also split off into a range of different styles. Freestyle skiing is one such style.

Freestyle skiing pushes the boundaries of what is possible in the snow. Though you may have heard of the discipline in the past, it’s not easy to categorize.

In this guide, we will take a look at what freestyle skiing entails, the exciting possibilities it brings, as well as where it may lead.

Skiing has seen a rapid progression over the last 50 years. In the early days of downhill skiing, you simply strapped on two skis on and hoped for the best.

The early days of ski acrobatics began in 1930, with on-snow escapades looking something like this.

Skiers always want to push boundaries, and many soon realized there is much more you can do than just head downhill and turn on skis.

Freedom and innovation have always defined the sport, and early ski acrobatics progressed into aerial skiing in the 1950s. Competitions and excitement for this style soon followed in the following decade.

Aerial skiing is basically ski jumping with various tricks and acrobatic moves thrown in. Rather than simply jumping for distance, early aerial skiers throw in multiple spins, twists, flips, and other maneuvers to add style and skill to the sport.

As general skill level increased, so did interest in the sport. Early aerial competitions laid the groundwork for the freestyle skiing that would come soon after.

Fans loved the thrill and excitement freestyle brought, and by the 1980s the discipline began to take shape. In 1979, the International Ski Federation officially established freestyle skiing as a sport.

The first Freestyle World Cup was held in 1980 and the first World Championships occurred shortly after in 1986.

In 1988, the Winter Olympics decided to hold a demonstration of freestyle skiing to see how people would react to it.

The interest and excitement were obvious right away, and the sport quickly expanded from the aerial-based elements to include moguls and aerials in the 1992 and 1994 Winter Olympics.

Rapid progression soon followed and led freestyle skiing towards where it is to this day.

Freestyle skiing is a worldwide sensation with a variety of categories that make up the entire style. There are multiple events in the winter Olympics that are now part of freestyle skiing, and the sport expands every winter.

New tricks are being performed every year, providing plenty of new maneuvers that help evolve the sport.

To understand exactly what freestyle skiing is today, it’s good to understand all of the basic elements and styles that contribute to the category.

Each of the elements below is included in the world of freestyle skiing, and they each offer a unique take on the sport.

Aerial skiing involves going off of jumps that are several meters high while performing various tricks and acrobatic maneuvers.

This was the element that started the freestyle skiing movement, and even though it has been around for quite a while, it is still popular and exciting today.

Aerial skiing is an Olympic sport and there are many other high-level competitions and circuits that occur every year all across the world.

Mogul skiing is another aspect of freestyle skiing that combines elements of both serious downhill skiing and aerial maneuvers.

Moguls are also known as bumps in ski terminology and today’s freestyle mogul skiers must traverse a mogul course at high speeds while going off jumps and performing aerial tricks during the run.

This is an exciting and competitive race-like event that combines the skills of downhill and aerial skiing styles.

Skiers traverse from one side of the halfpipe to the other while performing a variety of flips, spins, and grabs. This is an amazing interpretation of the sport that combines serious skill with on-snow athletic ability.

Slopestyle skiing involves going off a series of obstacles and jumps while performing high-level tricks. This is basically a terrain park competition, and if you’ve ever watched an event or seen a terrain park at your local ski resort, you have a good idea of what’s involved in slopestyle.

This style takes many elements of old aerial maneuvers and combines it with new features and tricks like rails.

Ski Cross is another element of modern freestyle skiing that doesn’t get as much attention as some of the others mentioned above. However, it is still an important and exciting element of the discipline.

Skiers race head-to-head against one another down a course full of jumps and other obstacles. The focus is not as much on aerials in Ski Cross, but it blends elements from old school ski racing with new school freestyle.

By definition, freestyle skiing is meant to be free and ever-evolving. With that in mind, it’s easy to see the potential and possibility of new things that come into the sport. If you’re a fan of skiing, you will love freestyle.

Do you have a favorite element of freestyle skiing? Why? Let us know in the comments below!