Can You Ski While Pregnant? 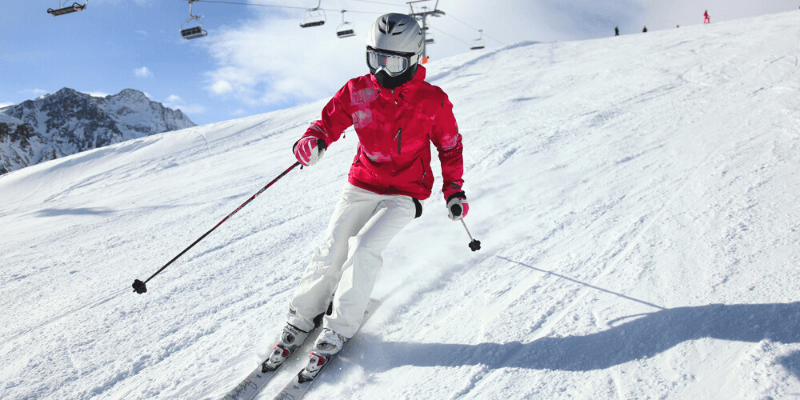 One of the best things about skiing is that just about anyone can take part in the activity. Young, old, and everyone in between; skiing is enjoyed by people of all ages.

Well, at least anywhere there’s snow. Skiing can be pursued aggressively or at a slower pace. That makes it appealing to people who want an adrenaline rush, as well as those who want a more leisurely activity.

While just about anyone can learn how to ski and continue with the activity for as long as they’d like to, there are some conditions that can make flying down the snow a bit more complicated.

One such condition is pregnancy. Is it even possible to ski while pregnant? Should you strap on your skis with a little one on the way, or is it better to ski a season to play it safe? We’ll take a look at that below.

The Dangers of Skiing

For all the fun and joy that skiing provides, it’s not without inherent risks. Skiing is a high-speed activity where you traverse slippery, snow-covered slopes.

Injuries and other similar accidents can often occur without warning, especially if you turn too quickly or take a jump that’s too high. Rocks and trees can also get in your way. As such, you have to be careful on the slopes.

Everyone partakes in dangerous activities. Some are fun, like skiing, while others, such as driving, happen through necessity.

Though your time on the slopes can be dangerous, it is easy to limit that risk with the right precautions and equipment.

People with pre-existing conditions should be extra cautious when skiing. It is a strenuous activity that involves physical exertion.

It also takes place in environments that pose certain challenges to the human body. This combination can make it hard for people with certain ailments, such as heart conditions, to ski.

It also means that if you are pregnant, you might want to avoid the slopes for a while. Let’s look at that in more detail.

Skiing While Pregnant – Should You?

First things first, it is possible to ski while pregnant. However, the risks involved with skiing can potentially threaten pregnancy and should be carefully considered before you take to the snow.

I have seen many mothers-to-be set out to enjoy a mellow ski day, but I have also known plenty of others who avoided skiing just to be safe. The risks of skiing are not always under your control, and that’s something you have to consider.

As skiing is a dangerous activity, doing it while pregnant comes with a certain set of risks. Not only do you literally risk your life anytime you strap in, but pregnant women put their unborn children at risk as well.

One terrible fall or bad accident can potentially result in a severe injury that could threaten you or your child.

If you want to err on the side of caution, you should avoid skiing while pregnant. That is what most experts will say, and for good reason.

However, if you’re a competent skier who truly understands the slopes, you can still ski if you take it easy.

If you do want to ski during pregnancy, know it’s always riskier to go during the times when miscarriages are more common.

In fact, you should avoid heading out from weeks 4 to 13. That is the time when the growing fetus begins to develop key life functions. It’s important to ensure you stay as calm as possible during that period.

Later on in pregnancy, skiing may be easier on the growing child but harder on the mother. Physical activity becomes much more difficult later on, which is why some pregnant women may view skiing as an impossible task.

However, easy runs can be a great way to get out of the house and pack in some extra exercise.

Whether or not you ski while pregnant comes down to personal choice. If you feel safe and confident while on skis, you should be fine.

Of course, accidents can happen, but their likelihood severely decreases if you take your time and don’t go beyond your comfort level.

Tips for Skiing Safely While Pregnant

If you do decide to ski while you’re pregnant, you need to take some extra precautions to stay safe and not push your body too much.

You should only attempt to ski if you feel energetic and healthy enough to do so. If you feel lethargic, tired, or sick, do not go skiing while pregnant.

The rigors of the sport combined with the cold and snow can make matters worse and threaten a pregnancy.

I would also suggest avoiding busy days or runs when possible. Skiing in empty areas will reduce the risk of you getting into a collision with another skier.

Try to go skiing on a weekday or at a resort that isn’t too busy. You should also go slow. Don’t try to push yourself too hard. Just enjoy some easy runs with a smile on your face.

Always remember to wear a ski helmet and plenty of warm clothing. A head injury is an extremely large concern for pregnant women, and exposure to the elements can lead to serious problems as well.

Play it safe and you’ll still manage to have a lot of fun.

Skiing while pregnant, though possible, does come with serious risks. It is your choice if you want to ski during that time, but you should always take it easy and be extra cautious no matter where you ride.

Skiing is an amazing sport, which is why so many find it hard to pass up a snowy season. However, unless they truly know what they’re doing, it’s often best for pregnant women to play it safe. There’s always next year.

Have you ever skied while pregnant or know someone who has? Let us know in the comments below!