Is Skiing Dangerous for Beginners? 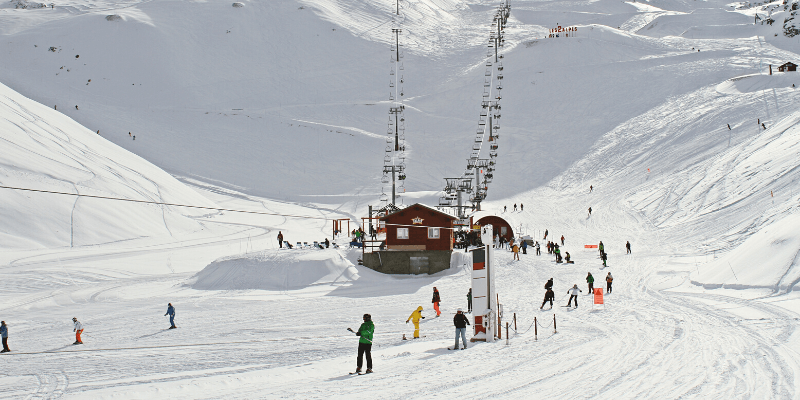 Skiing is one of the most fun snow sports on Earth, and it is enjoyed by millions of people each and every year. However, as with any extreme activity, it does come with a certain amount of risk.

Falls, injuries, collisions, accidents, and avalanches are all things you have to consider while on the slopes. Even so, is skiing really that dangerous?

This article will answer that question by breaking down the sport as a whole, checking statistics, and analyzing certain risks.

That will then shed light on the hotly debated question and answer why some people fear skiing while others do not.

It is first important to note that skiing is not dangerous from a statistical standpoint. That is to say, if you follow proper safety practices it is rare that anything bad will happen.

Most recreational skiers only see minor injuries, if any at all. Though the risk does go up as you move into both speedier or off-piste styles, there are only about 45 ski-related deaths a year.

That may sound like a lot in a vacuum, but with millions of skiers across the country it only amounts to 0.71 deaths per million. That’s a much lower rate than automobile crashes or even accidental falls.

The above data shows that, when broken down to numbers, skiing is not a dangerous sport. It may be more extreme than other activities, but chances are you’re never going to suffer too serious of an injury while out on the slopes.

That being said, it is not completely harmless either. You must always respect the mountain, and you never want to underestimate what can happen if you aren’t properly prepared.

The most common pitfall you’ll encounter when skiing is injury. Even the most experienced skiers can fall from time to time.

However, not every fall or spill is going to lead to you getting hurt. In fact, most won’t. Skiers tend to only get one injury every few years at the most, and when it happens it’s typically minor.

Even so, you can suffer a range of more serious problems, such as breaks or sprains, during hard falls or awkward crashes.

That is why proper preparation is so important. Most ski injuries come from bad practices, such as landing improperly or going on runs far beyond your experience level.

Wrist and knee injuries are the two most common injuries that occur out on the slopes, but in more serious cases head, neck, spine, and leg injuries also occur.

To avoid those, always get the right gear, stay in your comfort zone, and don’t be afraid to take a lesson or two.

In discussing the idea of dangerous skiing, it is important to note that people do die in the sport each year. However, as noted above, the deaths are few and far between. It is rare for a fall, even a nasty one, to lead to a fatality.

Most of the time, skiers perish as a result of colliding with rocks, trees, or people. In fact, most skiing-related deaths occur on blue runs when people try to do too much.

Overconfidence is extremely dangerous, as is when skiers try to do too much at once. It might seem like a good idea to hit a black diamond early in your skiing career, but such endeavors are where serious accidents occur.

The more you learn about skiing, the less dangerous it becomes. That is why the sport tends to be more dangerous for beginners and newbies than it is for seasoned veterans.

That is not to say that experienced skiers can’t get hurt while on the slopes, it is just much less likely because they are not as prone to mistakes.

As mentioned above, keeping yourself safe during a run is all about proper preparation. That goes double when you’re first starting.

It can be easy to try to do a trick or hit a run that’s far beyond your comfort zone, but that’s never a good idea.

Starting slow and understanding your own experience level is vitally important when it comes to staying safe on skis.

In addition, always get a lesson (or more) before venturing out on your own. Even if you’re going on an easy run or light trek through the backcountry, you never know what might happen.

5. The Higher the Peak, the Larger the Fall

While beginners tend to run into more injuries on the slopes, advanced ski runs also have some inherent risk. Steep cliffs, rough terrain, and various obstacles all present their own issues, as do long journeys into the backcountry.

In that way, while beginners can run into problems because they lack experience, advanced skiers face risk because they’re trying to do a lot more.

Every large run has an element of danger, but if you know your terrain, respect the conditions, and understand where to go, you’ll typically be fine.

The other issue that many people worry about when skiing is avalanches. The natural phenomena do occur from time to time, and they are quite deadly when they do, but they are not something most skiers will ever experience.

Avalanches kill 150 people a year, but few of those people are skiers. The ones that do fall victim to the snow often ignore posted signs or travel deep into the backcountry without proper knowledge of the terrain.

As with everything else, it’s all about how much they prepare for any possibility.

Ski resorts work hard to protect people from avalanches. If there’s danger in one area, they will let you know so you can avoid it.

At the end of the day, skiing is as dangerous as you make it. That is to say, if you know what you’re doing and take your time, you’ll most likely be fine.

It’s only when you start trying to go beyond your skill level or take on the mountain without proper preparation that you run into trouble.

Never underestimate the wilderness, and know that even groomed runs can lead to injury if not taken seriously. Be prepared and you’ll almost never have a problem.

Do you consider skiing dangerous? Why or why not? Let us know in the comments.