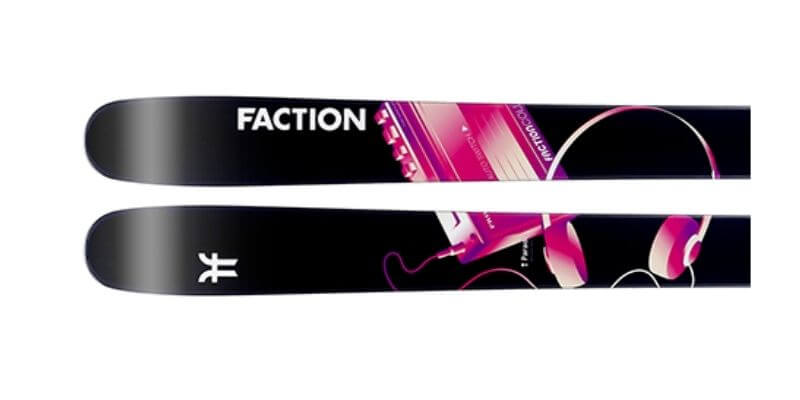 The Faction Prodigy 3.0 is a user-friendly downhill ski with great versatility thanks to tough construction built to withstand many different mountain settings.

I’ve been hitting the slopes since I was a kid. I enjoy getting out in the snow and have hands-on experience with a wide range of different skiing items. I spent a lot of time researching these skis, looking at each of their unique traits, and studying how they handled different mountain settings.

The Prodigy 3.0 is a ski that sits in the relatively new all-mountain freestyle category. As such, it provides you with reliable all-mountain performance alongside some excellent playfulness and the ability to hit some tricks here and there. It might not have the best park performance or the most well-rounded design, but it does its job exceptionally well. You’re getting decent value, ample versatility, and a premium structure at the cost of a bit of maneuverability.

When it comes to chop, the Prodigy does a nice job. The strong interior and stable design work with the dampness to give you a softer feel. You’re going to get a lot of stability as a result, which is good for riders who need to readily adapt to their surroundings. Being able to control your skis enables you to push aggressively through soft chop and helps you when the snow gets tough as well.

This ski offers quite a bit of versatility, which is one of its defining features. You’re able to hit some big turns on soft snow, but you’re also able to take on harder pack without slowing down. It’s not going to be able to hold its own in the same way something like a metal-laminate ski would, but it will stand up to both light and rough weather.

All characteristics considered, the Prodigy 3.0 is a fun ski that does a lot for those who want a playful feel. It’s not the most playful ski on the market, but it’s quite good for an all-mountain design. That’s just another example of how it blends multiple styles. It has a loose, surfy feel and is not hooky at any level. The only issue is the wider turn radius makes it a bit tricky to maneuver in certain areas.

Something else that contributes to this area is the tips and tails. They are quite stiff, which may put some people off. However, they are snappy in a way that actively allows you to hit obstacles out on the mountain. They don’t bend that well, but you’ll still get good results if you’re someone who enjoys doing everything they can to find space to nollie or ollie.

The Prodigy 3.0 has a nice weight to it. It feels solid in a way that provides better stability and downhill performance without adding on so many pounds that you’re going to regret dragging it around all day. That’s a nice feature to give you the best of both worlds. If you’re someone who wants a sturdy frame that doesn’t feel like it’s holding you back, these skis are a good way to go.

The Prodigy is plenty durable too. They use a nice combination of anti-chip technology with reinforced topsheets and sidewalls to ensure they can take hit after hit without wearing down. It doesn’t matter what snow you push these through, they’re going to offer great results and keep on trucking.

The ski also does a good job in powder, even if it doesn’t excel in incredibly deep snow. You’re going to get enough float for most situations, but the reduced rocker does limit you in that aspect. In addition, they aren’t always reliable when going sideways. That means, while the skis aren’t exceptional items in this regard, they will still be more than serviceable for those who like to get out into the fresh stuff every now and then.

The Prodigy 3.0 offers you a decent ski at a higher price than I would typically like when it comes to value. It’s not that the ski is inherently too expensive or not worth the tag (it gets that from the versatility), but rather that there are cheaper or similar models that do a bit more.

They are durable, however, and that helps elevate the general value. There’s also a 2-year warranty, which gives you another layer of protection should anything go wrong.

Durability is an important part of any ski, and I appreciate the length Faction went to making sure the Prodigy 3.0 can stand up to the test of time. The resistant top sheets are extremely nice, as are the special anti-chip tip and tail caps. Both features ensure you can jump, zip, or ride without worrying about the skis breaking down.

Though not nearly as important as the construction, it’s also worth mentioning the Prodigy’s appearance. It’s one good-looking ski. They have striking topsheets that give you strong colors and cool graphics without ever going overboard or looking too busy. The mural art looks fitting, and you get a strong appearance that isn’t too obvious. That’s always something I appreciate when choosing my gear.

If the Prodigy 3.0 has one drawback, it’s general maneuverability. As mentioned above, it can still be used in areas you wouldn’t think it would succeed in, but it turns a bit wide and can be a little too much when you need to keep things tight. This won’t be a huge issue for most users, but riders who enjoy making swift turns or who like to weave at the turn of a dime will not get that functionality with this model.

The Prodigy is a solid ski that, while strong, is not perfect. There are a few other reliable models in the space that all bring something unique to the table. If you want some that will give you good results, these will deliver:

What type of core do these skis have?

They have a medium-weight poplar wood core to add some flex, pop, and durability to the entire package.

How much do these skis weigh?

The pair comes in at close to ten pounds.

Do these skis come with bindings?

No. There are no bindings included with the Prodigy 3.0.

What type of ski is this?

The Prodigy 3.0 is a freestyle all-mountain option aimed at succeeding in different areas.

There’s a lot to like about the Prodigy 3.0. Faction has gone to great lengths to ensure it’s fun to use, easy to pilot, and built to last.

While it’s not the easiest to use in tighter areas, it still does a pretty good job in wider bumps or more open trees. The construction is top-notch and there’s plenty of pop for those who need it.

If you’re out looking for a versatile option you can use across numerous environments, it’s hard to find a more reliable package.