What to Do with Old Ski Boots 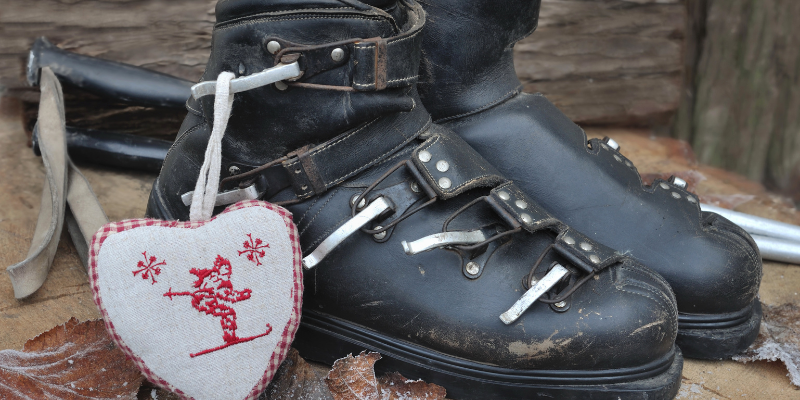 If you ski often, you will eventually wear out your equipment. This can take years, but after enough time, you might come to a point when you wonder what to do with your old ski boots.

I’ve been an avid skier for nearly my entire life. I’ve gone through a lot of different equipment over the years and found ways to get rid of or repurpose my old skis, boots, and other gear.

In this post, I’ll give you some ideas of what to do with old ski boots. You don’t necessarily have to throw them out, and you can always hang onto them to start a trophy collection of all your old gear.

Let’s jump into it.

How to Deal with Old Ski Boots

If you have old ski boots that you don’t want or need anymore, you can do a few different things with them.

I think the best thing you can do with old ski boots is to donate them. This might help a skier who can’t afford their own equipment, and it prevents them from ending up in a landfill where they just end up becoming trash.

You can donate boots at nearly any second-hand sports or thrift store. Even if they aren’t in great shape, these locations will still accept them. You can always call the store before to ensure they will accept old boots.

Many locations will also allow you to write off charitable donations on your taxes, which is a win-win for you and the lucky person who might inherit your ski boots.

If your boots are still in decent shape, you can always try to sell them. While I don’t really recommend purchasing used boots, that doesn’t mean someone out there won’t want to buy your old ones.

Free classified websites like Craigslist and Facebook Marketplace are good places to sell old ski boots. You’ll have to decide how much you want to sell them for and deal with people coming to check them out.

I wouldn’t expect to get too much money from old boots. You might luck out and get a couple of hundred dollars, but I think $50 to $100 is much more realistic. But I guess any money is better than none at all!

I’ve seen old ski boots be repurposed into many different things. If you get a little crafty and creative, you can come up with some sort of idea that involves using your ski boots in a weird or wacky way.

One idea is to turn them into planters. I have some friends who have one section of their garden full of ski boot plants. It sounds weird, but it looks pretty sweet! Just fill up the old boot with garden solid and put in your desired plant.

Another idea is to turn them into some sort of art project. You can paint the boots or use them as part of a ski sculpture. I’ve seen some pretty cool ski art that uses old boots. The sky is the limit with ideas here.

You can also hang onto your old boots just in case you need or want to use them in the future. Ski boots won’t take up that much room if you have the space, and you can keep them in a basement or garage.

I recommend putting them into some sort of storage bin, box, or container if you are going to save them. This will prevent critters like mice or spiders from getting inside them while they are sitting around.

You never know when you might need an old pair of boots. Maybe a friend needs to borrow a pair, or you end up breaking your new ones in the middle of the season. It never hurts to have a backup pair, even if they are older.

If your boots are in terrible shape, you might not have any other option but to get rid of them. This basically means throwing them out with the trash. Place them in a garbage bag or garbage bin, and they’ll end up in the landfill.

Throwing out your old boots should be a last resort. If you can avoid doing this, I would try to because you don’t want to contribute more trash unnecessary trash to the world. However, sometimes it’s the only option and is unavoidable.

When to Get Rid of Old Boots

If you notice any severe damage to your boots, it’s probably time to stop using them for skiing. You can possibly get them repaired, but eventually, your ski boots will wear out, and it’s time to get rid of them.

Some people like to get new ski boots pretty often, which means they might want to get rid of their old ones every few years. If you have the money to get new boots often, then you’ll get rid of old ones more.

If you’re like me, you’ll hang onto your boots until the very last moment. I like to get the most out of my equipment and probably only get rid of my boots once every five years or so. But I like to hang onto my old ones, just in case.

There are plenty of ways to get rid of old ski boots. Donating them is the best option, in my opinion, but you can really do just about anything you want with them. The tips here are just suggestions.

Let me know if you do something different with your old ski boots!