What is Telemark Skiing? 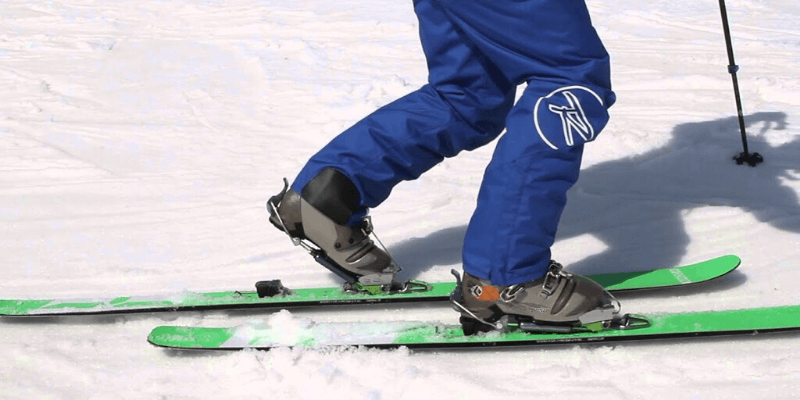 Skiing has come a long way over the years. The continued popularity of the sport has led to many different styles that people now practice all over the world.

It’s exciting and fun to watch the evolution of the sport take place, and it seems as though there are new off-shoots, tricks, and techniques being developed every season.

All of these variations involve skis, but they can be quite different from one another as well.

Telemark skiing is a popular discipline that has been around for many years. It involves skiing with a free heel that’s not securely connected to your ski as it is in alpine skiing.

Let’s take a closer look at telemark skiing and dive into how this style came about and why you might want to consider giving it a try.

Telemark skiing is a blend of different skiing styles. If you have spent any time at a ski resort, there’s a good chance you’ve seen a telemark skier go down the mountain at one point or another.

You might not have known what was going on at first glance, but you would definitely recognize the difference in style and approach compared to regular alpine skiing. The defining characteristic that distinguishes telemark from alpine skiing styles is a free heel.

Having a free heel makes the discipline more closely related to the origins of skiing and the Nordic style that modern downhill styles.

In that sense, telemark skiing combines both Nordic and Alpine styles to create a type of skiing that’s unique unto its own.

Telemark skiing involves the free heel just as in Nordic skiing, but it also incorporates a stiffer boot and wider skis with edges more commonly seen in downhill and alpine styles.

Telemark first came about in a region of Norway, which is from where it gets its name. Today, it is also known as tele-skiing or teli-skiing, but its roots go back to the late 19th century Norway where skiers would ski downhill terrain with a free heel and their toe attached to a small binding.

The discipline did not start to catch on in the United States until the 1970’s. From there, it steadily began to rise in popularity until it reached where it is today.

Many skiers tried telemark skiing in that time, and they began to develop new bindings and ski types that catered specifically to the style.

Modern Telemark skiing is similar to alpine styles in that the ski shape and design are often the same. In fact, it’s possible to have the same model ski work for both an alpine and telemark skier.

The only difference would be in the bindings and the boots. Telemark bindings attach only at the toe, leaving the heel free. Telemark boots are also smaller and more flexible than traditional alpine boots.

Some Telemark skiers only ski at resorts and inbounds. With every turn a Telemark skier makes, their knee drops into an almost full-lunge position.

It is a very graceful and beautiful movement that makes the skier look almost as though they are performing some sort of dance on the snow. With every turn, they will alternate which leg and knee are dropping into the lunge.

One advantage of Telemark skiing, and a reason so many first gravitated towards the style, is that skins could be attached to the bottom of the skis so that you could move uphill.

That is quite similar to Nordic ski styles, and would become the basis of what is now known as alpine touring. Skins are textured pieces of fabric material that can be attached to skis to enable them to grip the snow instead of just slide over it.

By utilized skins and a free heel, Telemark skiers could access new terrain and explore untouched backcountry conditions that wouldn’t be possible with a fixed heel or on cross country skis.

Telemark offered the opportunity for skiers to reach amazing skiing possibilities by covering large distances on flat and uphill terrain.

That versatility is an obvious advantage when it comes to accessing hard-to-get places on skis.

By combining the transportation elements of Nordic skiing with the downhill fun and capabilities of Alpine skiing, Telemark skiing allows for a tremendous amount of flexibility and adaptability.

That then enables skiers to have a lot of fun and explore areas that were once nearly impossible to reach.

Rene Martin from Absolute Telemark has made some amazing tutorials, you may want to check them out here.

Modern alpine touring styles have caused Telemark skiing to drop in popularity. That is because the modern styles allow easy access to the backcountry.

However, without the innovations created by Telemark skiers, tour skiing would not be what it is today. By combining elements of several different styles of skiing, Tele-skiing afforded further possibilities for the sport to evolve.

If you’re interested in Telemark skiing, you should give it a shot. There are still plenty of places that rent Telemark equipment, and it can be a fun challenge even if you are an experienced skier.

I would recommend skiing with another tele-skier or even taking a lesson to get the basics of how it works and how it is different than alpine skiing. If you’re looking for a fun challenge or simply some variation, Telemark skiing is a great option.

Within the world of Telemark skiing, there are also several variations of the style. Some skiers do not use the drop knee approach as much, while others strictly use a free heel for skinning purposes.

Modern touring bindings have the option to free or lock in your heel, giving you the transportation abilities of a free heel with the downhill capabilities of alpine styles.

Have you ever been Telemark skiing before? Did you enjoy the experience? Let us know in the comments below!