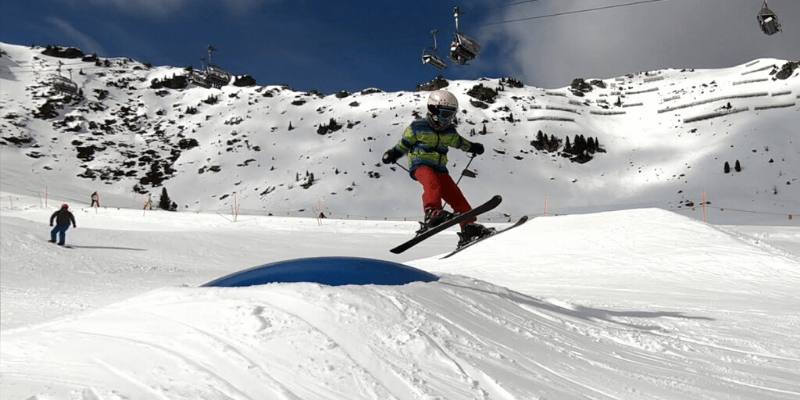 Even though many people think of skis as relatively straight pieces of equipment, slight variations can make a big difference. That is why some people ride with snow blades.

While you may not know what snow blades are, this article will examine how they operate, the way they differ from skis, and why so many snow enthusiasts choose to use them.

What are Snow Blades?

At first glance, snow blades look like really short skis. They were first created as a shorter alternative to the longer ski models that have popped up on the market as of late.

We will get into the benefits of snow blades when compared to regular skis shortly, but their main defining characteristic is that they are short.

Snow blades also have a shaped profile that’s often similar to that of a snowboard. This means they have a parabolic shape that looks much more like an hourglass than a straight ski.

They come in various lengths and widths, just as with skis, but snow blades can be anywhere from 75 to 100 cm long.

As they have a metal grip alongside a wood core surrounded by laminates, snow blades work in the same ways as skis do when on top of the snow.

The two main benefits of snow blades is that they are easy to learn on and simple to control. The shorter length means there’s less material to handle.

That gives them a feel that’s almost like roller skating or rollerblading on the snow. They are lighter than skis, which allows for easier maneuverability, and they have a smaller turning radius.

Beginner skiers who struggle with regular skis can often do better on snow blades while they learn the basics of the sport.

The increased turning radius makes it easier to traverse certain terrain features, such as moguls and trees. A smaller ski is also far easier to use in smaller spaces where quick turns are required, and snow blades are about as small as skis can get.

Snow blades can also be a lot of fun if you want to learn some tricks. With a smaller ski, it’s much easier to complete tricks like spins because there’s less weight attached to your boots.

When you wear snow blades, you’ll be able to attempt maneuvers that you might not have been able to do in longer skies.

If you’re a beginner skier, you shouldn’t attempt tricks at first. However, if you have some experience, snow blades can allow you to have more fun in the air and off jumps.

It’s a good way to learn some maneuvers because you can get a good feel for what it takes to complete the trick on smaller skis and then translate that into your attempts on full-length models.

While snow blades can be a lot of fun, and while they make skiing a little more accessible for beginners, they don’t perform as well as skis.

If you want to tackle big mountain conditions such as steep slopes, deep powder, or high speeds, you will be far better off on regular skis than snow blades.

With their shorter length and smaller size, snowblades don’t do well in powder conditions. You might struggle to move quickly on a moderate slope covered in over six inches of powder with snow blades on.

That’s because they have far less surface area to keep you on top of the snow. If you love skiing powder, you should stick to regular-sized skis.

Snow blades are also much slower than regular skis. That’s great for beginners because you’ll feel more in control, but if you have had a taste of what it feels like to go fast on skis, the limited speed allowed by snow blades is a definite disadvantage.

Again, this is due to snow blades having less surface area to build up speed. If you do go fast on snow blades, they will start to chatter.

Snow Blades vs Skis: Other Considerations

Many skiers enjoy that snow blades don’t require ski poles. If you’ve ever wondered what the purpose of poles are, or if you have struggled to use them, you might want to try snow blades because you don’t have to worry about using poles at all.

You still could, in theory, but with such a short ski, poles aren’t necessary.

Another thing to note is that there’s often some negative perception of people who use snow blades. This comes from regular skiers who see snow blading as a form of the sport that’s not as cool or valid.

While you obviously are free to slide down the mountain however you choose, there’s a chance you could get heckle by hardcore skiers who don’t like snow blades.

I have only seen this happen a small number of times, but it’s good to know about in case other skiers give you attention while you have snow blades on. In general, most skiers are pretty nice.

There will be times, however, where you might encounter an angry skier who frowns on your short skies.

Snow blades can be a lot of fun. Even if you don’t plan on using them all of the time, I would recommend using them at least once just so you know what it’s like to ski on them.

For a beginner, they can be a good learning tool that will enable you to increase your abilities in an easy and approachable manner.

Snow blades are unique and not as popular as regular skiing, but that doesn’t mean they aren’t as fun or rewarding as their longer relatives.

In my opinion, any day on the snow is a good day and it really doesn’t matter what you choose to put on your feet. Just get out there and enjoy it!

Have you ever used snow blades? What did you think of them? Let us know in the comments below!