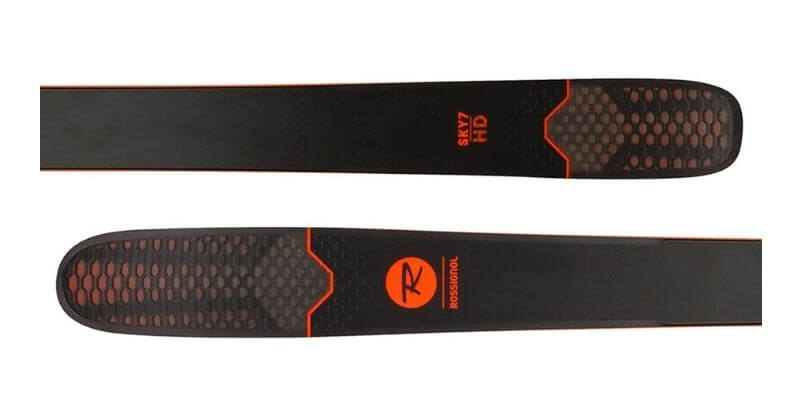 This is my review of Sky 7 from Rossignol. In my opinion, it is a lightweight ski that, while tough to maneuver, enables you to go on and off-piste with ease thanks to a sturdy base, good float, and great edge grip built into the design.

I’ve been hitting the slopes since I was a kid. I enjoy getting out in the snow and have hands-on experience with a wide range of different skiing items. I spent ample time researching these skis by breaking down their various traits and talking to many skiers who took them out onto different slopes first hand.

If you want an all-mountain ski that does a lot of things well, the Sky 7 is worth a long look. The model isn’t quite an all-star in any one area, but it can be used in a range of different ways. It does well as a mainly off-piste option but comes with the turning power and ability to handle on-piste conditions now and then. It’s not going to blow away the competition, especially when it comes to maneuverability, but there’s a lot to like in terms of versatility and design.

Versatility in Powder and Crud

Soft snow is where this ski truly shines. The pair does a great job in powder, thanks to the solid amount of float and the ability to easily maneuver in more open conditions. You’re going to have a lot of success with this off-piste, and it also does well in the resort. That’s mainly due to the Air Tip 2.0, a feature that cuts down on weight and enables you to get after softer conditions without sinking or losing your control.

The ski also holds its own in crud. Though this isn’t a real buster, it will do well when things get choppy or uneven. That, backed by the strong powder performance, provides you with a truly versatile ski you can use in a range of different settings.

As a carving ski, the Sky 7 is good but not great. That’s the standard for the pair, but it’s not the end of the world. The extra functionality there reinforces how many ways the pair can be used. You can make longer turns when riding on hardpack, even if there isn’t a ton of responsiveness for quick pivots. Beyond that, the ski can struggle a bit at the top of the turn. It’s a model mainly made for off-piste skiing with added on-piste functionality, not the other way around.

A Lack of Responsiveness

As much as the Sky 7 excels in some areas, it is not the most responsive ski on the market. It’s big and burly, two aspects that are not conducive to tight control. Add on the 18-meter turn radius as well as the 98mm waist, and you get something that you’re going to want to use in wide-open spaces off-piste rather than in tight areas where you need a lot of maneuverability.

This ski is undoubtedly tough. While that comes with certain benefits, it does hurt in the agility area. These skis aren’t the best for people who hit the bumps or like to get into tight trees. The strong wood/carbon alloy core backs up that construction in favoring open spaces. If that’s you, these work great. If you want to hit short turns on hardpack, you’re going to want to look elsewhere.

The Sky 7 gets mixed results in terms of stability. If you’re looking for a rock-solid ski that will give you a sturdy platform in any area at any speed, this isn’t it. Instead, the model is a decently stable ski that will hold up when cruising and fall off a bit when you really get going. You’re going to get some chatter at higher speeds, which is a bit of a bummer for those who like to zoom down their runs.

The Sky 7 offers pretty good value at a pretty good price. This ski has a decent amount of durability on top of a clean look and a good amount of versatility. In addition, it also isn’t going to break the bank (especially if you can find it on sale). You’re always going to pay quite a bit for a decent pair of skis, but when you can save some money on a reliable pair, I consider that a large bonus.

My favorite aspect of these skis is the way they handle both soft snow and hardpack. Unless you have a particular form of skiing, you never want to be backed into a corner. All-mountain options need to give you a strong amount of versatility, and that’s exactly what this one does. Even if it’s not the most versatile or well-rounded item out there, I’m a big fan of how it lets you adapt to different conditions.

Something else I like about this ski is the playful feel. The sidecut is a nice bonus to help mitigate some control issues, while the wood core cuts down on weight without taking away any general power. This is a pretty fun ski no matter where or how often you like to ride. It’s beneficial for those who spend their time ripping up slopes out of bounds.

For me, the area where the Sky 7 falls short is the responsiveness. The ski is large and powerful, and while that’s nice in certain conditions, I don’t like how hard it is to take out or maneuver around tight areas. The turn radius is a bit larger than what I would prefer, and the 98mm waist takes some power to control. Even the core favors wide, open turns rather than ones you need to make on a dime.

I wasn’t too enamored with the stability either. Though the Sky 7 does a fine job when you’re cruising, anytime you get up to speed, you’re going to get some chatter. That’s not ideal for a ski you want to take out into open areas, which hurts the general performance.

There are several good all-mountain models out there that provide you a versatile ride with some fun extra features. These all meet that mark:

Does this model have any significant changes from year to year?

No. The only real change comes from a switch in the graphics.

What type of core do these skis come with?

The Sky 7 has a paulownia core with a carbon alloy matrix.

Can advanced skiers use these?

Yes. The Sky 7 Skis are great options for both advanced intermediate and expert riders.

If you’re looking for a lighter ski that you can use to both rip off-piste and cruise in-bounds, the Sky 7 is a solid pick. Though you’re not getting true premium functionality, it has impressive performance in both powder and crud.

No matter how you like to ski, this model is up for the task. That makes it a solid pick for intermediate or advanced skiers who want to get out of bounds every now and then. You’re losing some maneuverability and stability with this model.

However, for the price, it’s a good pick up if you need some extra options out on the mountain.