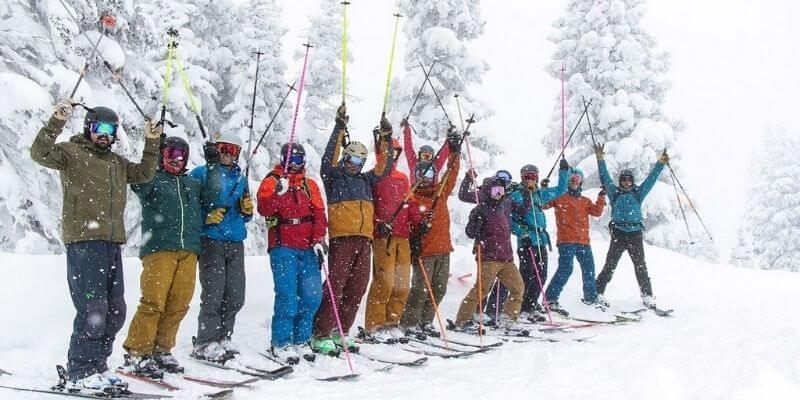 Skiing technology has rapidly progressed over the course of the last few decades in a way that has greatly impacted both how skis function and what they allow you to do. A lot of that technology has to do with the shape or profile of any given type of ski. In the good old days, you would really only see one type of shape that was available in different sizes. Today, they are a wide variety of options for both shape and profile to cater to your individual preferences.

Atop the recent advancements are two now common profile shapes: rocker and camber. If you’re a serious skier, it’s worth knowing about both because they can help you make an informed decision about which skis to purchase as well as give you a better understanding of how a given set up skis can perform in certain conditions or terrains.

Before we dive into the differences between rocker versus camber, it’s important to first understand how we will describe the shape and profile considerations. Picture looking at a ski on a tabletop or workbench at eye level when envisioning its profile. If you look at it from the top or bottom, you won’t be able to see the nuanced differences in its profile. If you have a set of skis at home, you can literally set them on a table to view the discrepancies.

You’ll notice that there’s a section highlighted in red known as the effective edge. This is the area of the ski that you actually use to turn, stop, and control while you ski down a slope. It also directly affects your profile.

Ski camber refers to an area of the ski that sits slightly above the surface of the ground when there’s no weight on the ski. There are two points at the tip and tail that touch the ground, while the middle section is a bit higher up. This is a traditional camber profile and is fairly common on a lot of modern ski designs.

Cambered skis are popular because they allow for good stability and control. When you step into your bindings and push your weight down, the cambered effective edge comes into contact with the snow and gives you excellent control. This ski’s floating nature is sometimes called ‘pop’ when describing how a ski performs under full speed and demanding conditions.

A lot of professional skiers like cambered skis because of their ample performance attributes. They do require a bit more skill to unlock, but if you’re a seasoned skier they will give you great response and control whenever you need it. The style is also versatile and can provide increased performance on many areas of the mountain.

Cambered skis are better suited for harder snow conditions, such as racing or hitting the terrain park. That’s because they give you better edge control. However, they aren’t as useful in deep snow or powder conditions. They also give you a better turning edge overall, which again comes into play when you’re skiing on more packed and hard snow conditions.

The other main profile shape worth taking a look at is rocker. Rocker, also sometimes called reverse-camber, has a bend in the opposite direction of a cambered ski. When you see a ski with its tip or tail (or both) bending upwards and away from the snow, that’s rocker.

A fully rockered ski is quite rare and not all that useful. As such, you’ll find a lot of modern options have a rockered tip and tail with camber in the center. That makes for great all-mountain skis. If you’re looking for a powder ski, you’ll want to make sure it’s built with plenty of rocker as well. Some skis have just a tip rocker and some have both a tip and tail rocker, which is ideal for all-mountain and powder conditions.

The upward bend of a rockered ski allows it to float more easily on deep snow. That float also gives you a solid feel and increased control in powder. The downside with this style is that it will shorten the effective edge of your ski, meaning you won’t have as much edge control when you’re moving fast in harder snow conditions.

I personally prefer the versatility that you find in an all-mountain ski. Such models incorporate both rocker and camber into their design, which makes them capable in a wide range of different conditions. That gives you the best of both worlds. It’s the perfect option for those who like to ski high-speed groomers to deep powder lines and everything in between.

Camber underfoot with a rockered tip and tail will give you the benefits of both design profile characteristics and allow you to crush lines all over the mountain. You should always experiment with a shape or profile and not just take my word for it. If you’re looking for a great all-around starting point, this is the type of ski I would always recommend.

Now that you know the difference between camber and rocker in skis, go out there and experiment with a few different shapes the next few days you are on the mountain.

If you don’t already know your favorite style of ski, put different profiles to the test and use them in your preferred style to see if you can figure out your personal preference. You’ll be amazed how much of a difference small changes in rocker or camber can make.

Do you have a preferred ski profile? Why do you like one over the other? Let us know in the comments below!