How to Ski Backward 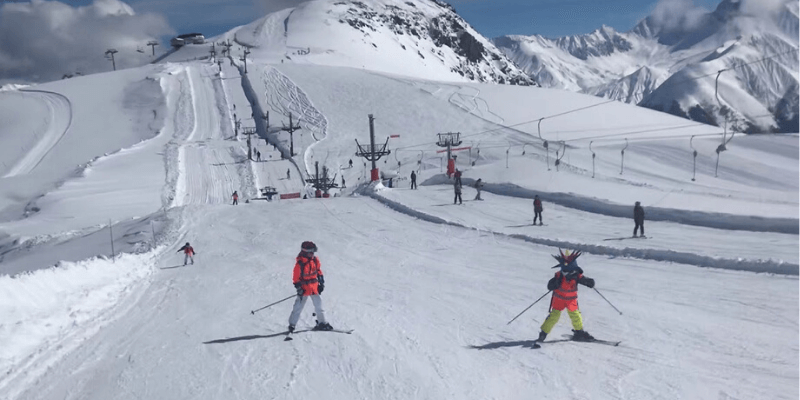 When people are skiing, many of them love the adrenaline and rush that it provides. However, if you ski enough, this will start to dwindle over time. It will still be fun, but you won’t get the same rush you got when you were learning the ropes and first starting out.

As a result, many people want to challenge themselves on the slopes. One of the best ways to challenge yourself is by learning to ski backward. There are few better ways to show off on the hill than by skiing backward. Skiing backward can also help you teach your children how to ski, so you can always keep an eye on them.

Whatever your reason for wanting to learn this skill, this guide is going to go over how to ski backward.

Skiing backward is not all that different than skiing forwards. In skiing terms, going downhill backward is also known as skiing switch. This is a term borrowed from snowboarding lingo that’s now widely used on ski slopes.

The main difference between normal forwards skiing and more advanced backward skiing is obviously the way your body faces. The way you turn and maneuver is actually very similar between the two.

When you’re first learning how to ski backward, you want to make sure your first attempt is on a fairly gentle slope. You don’t want to go backward for the first time on a really steep run because you can quickly get out of control. Start on an easy green where there aren’t a lot of other skiers. Wide open runs help you turn, stop, and start with ease.

Remember that you’ll always want to look behind you when skiing backward. That should go without saying, but it’s really important to note because I’ve seen plenty of skiers forget to look downhill on their first backward attempt! Choose a shoulder that feels comfortable to look over and turn your head at an angle that will allow you to see everything that might come your way.

Tip 1: Ensure You Are a Decent Skier

Before you even think about learning to ski backward, you need to make sure you are talented at skiing frontwards. You need to be comfortable controlling your speed, carving and turning without issue. All of these skills will be needed to transition into skiing backward, so be sure that you have them.

While you don’t need to be an Olympian to learn how to ski backward, it isn’t something you should try to learn if you are brand new to the sport. Once you are fully comfortable going forwards and handling all that a ski slope can throw at you, you are ready to try your hand at going backward.

Twin-tip skis are not only rounded on both ends but point up a little, which keeps them from getting stuck in the snow. These will make turning and skiing backward much simpler and safer. Of course, be sure to wear other safety gear like a helmet to keep yourself safe and sound.

Tip 3: Practice on a Quiet and Easy Hill

When you are ready to ski backward, it is a good idea to find a quiet and easy hill to learn on. The fewer people on the hill, the better. If you practice this new skill on a busy slope, there is a good chance you could run into people and be a safety hazard. You should also make sure the hill is quite gentle with a lot of space, to make the learning process simpler.

Also, be prepared to take some falls and for the acquisition of this skill to take a while. You won’t learn in a day. Practice makes perfect, so be sure to put the work in and not get discouraged. Over time, you will surely learn to ski backward better than when you started.

Tip 4: Get the Movements Right

The movements and positions you’re in will be crucial in learning how to ski backward. The general position is similar skiing forward and backward, except you will want one ski a little more forward than the other. Scissoring your legs back and forth (alternating which leg is forward) will allow you to not only carve going backward but also be able to easily look over your shoulder.

You should start carving as soon as you begin moving backward. If you don’t and start sliding straight down the hill, you will gain too much speed too quickly. This is a great video that helps illustrate the right movements and positions for skiing backward.

Tip 5: Be Sure to Watch Where You’re Going

When skiing backward, it could feel natural to look up the hill, but that is generally not advised. If you do this, you will be completely blind to where you are going and could run into people or other hazards like trees. This can easily lead to accidents and crashes happening, which will likely be your fault.

After you get the basic feel for the skiing switch, you can increase your speed and tackle steeper runs. As you attempt more difficult runs, your form needs to be good to make backward skiing possible. When you’re first learning, it’s easy to catch an edge or cross your tips. That can then cause you to fall. Though such problems can be discouraging, they tend to fade over time.

As you start to increase your speed, you need to maintain a parallel ski stance in order to stay engaged and in control. For a good look at proper switch skiing technique, check out this video. Notice how the skier has one ski slightly in front of the other with his knees bent, and his head and torso turned to see everything around him. As he turns, he swivels his hips and keeps the skis close together.

The type of skis you use also makes a big difference in backward skiing. While skiing switch is technically possible on any ski type, twin-tip skis are far better suited for the task. That is because the tip and tail both point slightly upwards. That’s an obvious advantage to skiing backward because even when your skis point in the opposite direction, they will still naturally glide downhill.

Skiing backward is a pretty easy skill to learn that looks quite impressive on the slopes. It takes time and practice to get really good, but it’s a good way to add an element of style to your overall skiing approach. While not every skier wants to learn how to ski backward, I would recommend it to anyone who hasn’t tried it before.

So get out there and try the tips mentioned here to help you ski backward. It can be not only a fun trick to show off to your friends but also has some practical applications in some situations.

Do you know how to ski switch? Do you have any tips for others learning how? Let us know in the comments below!