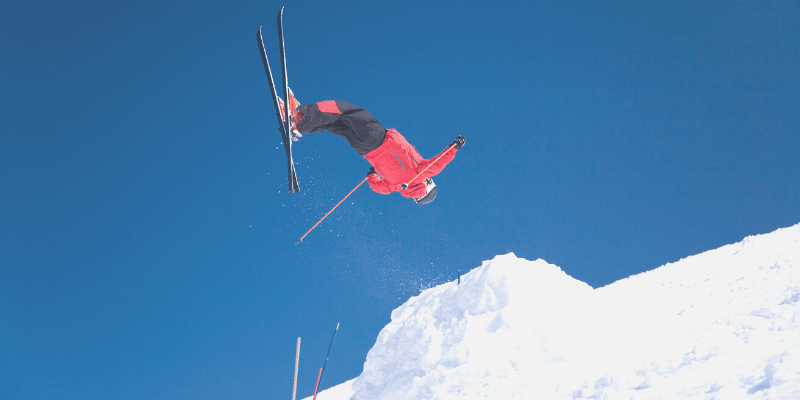 Learning new skills and tricks on skis is a great way to challenge yourself and take advantage of your time on the mountain. A 360 is an intermediate-level maneuver that can be mastered with focus, patience, and practice.

I’m Christine, and I created this blog to help other skiers who love the sport just as much as I do. I’ve been skiing for decades and landed my first 360 when I was a teenager. I like to help other skiers learn new skills, and I’ve helped several of my friends stomp 360s.

This post will show you how to 360 on skis. Whether you have ambitions of becoming a high-flying freestyle skier or just want to pick up a new trick to show to your friends, the advice here will get you pointed in the right direction.

Before attempting a 360, you need to be comfortable with basic ski jumping techniques. You don’t want to start hucking yourself off big jumps and spinning in the air if you have no idea how to hit a small jump and land safely.

Check out my other post on how to jump on skis if you are a beginner, or take a look at the video below for some quick advice to show you a jump progression that will get you closer to attempting a 360.

If you feel ready to start throwing 360s, you should also pay attention to safety. Skiing is always a dangerous sport, but things become even riskier when you start getting air. Always wear a helmet, and don’t try anything too far ahead of your current ability level.

One of the very first steps to spinning a 360 on skis is knowing which way to rotate your body. Most average skiers will have a direction that feels more natural to turn than the other. For me, spinning over my left shoulder (counter-clockwise) is the most natural.

To figure this out, you can do some dryland training and simply jump up and try to spin a 360 in your yard or some area indoors that has enough room for you to attempt safely. One direction will feel easier, and you’ll know which way to spin.

There are some people out there who feel comfortable spinning in both directions. If this is you, you’re lucky and might be well on your way to becoming really good at aerial ski tricks and other spinning maneuvers.

Once you feel comfortable spinning a 360 on flat ground, it’s also a good idea to try the trick without skis on in other situations. You can practice on a trampoline or even jump off the side of a pool while spinning a 360.

While these steps aren’t absolutely essential, they will help you become a lot more comfortable spinning through the air before you have skis on. This will translate directly to jumping and spinning on skis and help you find the balance and technique needed.

Once you feel comfortable with a few dryland spins, it’s time to take things onto the snow. The smaller jumps in the terrain park are ideal for learning this trick, rather than just throwing yourself off a natural jump or other feature.

*Tips: I highly recommend using a smaller jump for your first attempts at a 360. This will make it easier to fall without getting hurt, and you are going to fall during your first few attempts at mastering this trick.

If you feel like your poles are getting in your way, you can always try to spin without them. This is easy to do in the terrain park and another reason why I tell skiers they should first learn how to 360 on the smaller jumps in the park.

Spinning in the air is one thing, but landing is another skill altogether. You might find that you can easily spin in the air but always fall when you try to land. That’s ok. It takes time and patience to make both of these things happen simultaneously. Just stick with it.

Once you have the hang of doing a 360 and landing on smaller jumps, you can start to go bigger. But take your time working up to the largest jumps in the park or huge natural features.

Whenever I’m perfecting a new aerial trick, I like to try it somewhere with a soft landing. If you build a jump on a powder day, you can work on all your favorite tricks like a 360 without too much worry of falling hard and getting hurt.

Spinning a 360 on skis is a great trick to learn, and it isn’t all that difficult. Some skiers have a mental block that makes them afraid to try this. It can be challenging to work through this fear, but it’s totally possible if you take your time and push yourself!

At the same time, you never want to force yourself into doing something you aren’t comfortable with on the slopes. If you don’t have the courage to try a 360, keep practicing, and you’ll feel more capable soon.