How Do Ski Resorts Make Snow? 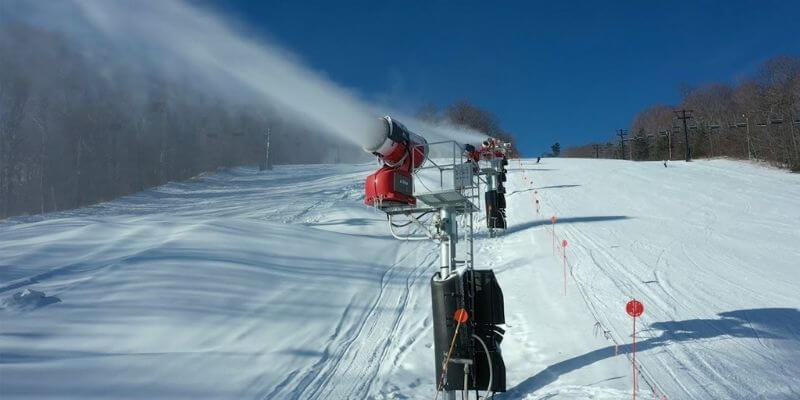 While many ski resorts exist in areas that get a lot of snowfall, there are some resorts that sit in places that get almost none.

That may sound odd, but the way those resorts get snow to their visitors is by making it themselves. Even some resorts that have a lot of snow will rely on making their own to get better coverage.

Artificial snow also helps them to extend their skiing season for a considerable amount of time. However, that may lead one to wonder, how exactly does that snow get made?

What goes into the process and what are the machines that do the work? That’s exactly what this guide will cover. Read on to learn all about how ski resorts make their snow.

The Process of Making Snow

Ever since the accidental discovery of man-made snow in the 1940s, it has been growing more and more popular for ski resorts to make their own snow. Though it might sound confusing, the process is quite simple.

When snow falls from the sky, it begins as water vapor, which then freezes on its way down and becomes a snowflake. When artificial snow gets made, it’s done by using liquid water.

Tiny droplets get blasted through nozzles with pressurized air and then freeze instantly. They are then mixed with slightly larger droplets, and then sped through a variety of other nozzles to create snow.

However, the snow created by those machines is often made up of tiny little balls and not the snowflakes that most of us are accustomed to seeing.

That’s because, once they come in contact, both artificial and natural snow can combine to become a continuous snow pack. Trying to separate the two is an extremely difficult task.

While some prefer natural snow, artificially-made snow can be just as good. In fact, there may even be some benefits to artificial snow over natural snow. For example, human-made snow is often more durable and generally takes longer to melt.

The Different Types of Snowmakers

In general, there are two different machines that are used to make snow. There’s the lance snow gun and the fan snow gun.

The lance snow gun is generally quite tall and slim, and many resorts will use a collection of them at once. They are connected to a centralized source of compressed air, which goes throughout the resort to all the guns.

These lance snow guns can be either be internal-mix or external-mix, and the difference comes down to where the water and air are mixed together to create the snow. Most of these are attached to towers of some kind to give them more height.

The other option, fan snow guns, often look like oversized hairdryers. They have dozens (or even hundreds) of nozzles around a ring that shoot the water in front of the gun where the air is pumped. They have an on-board compressor and work extremely well in the wind.

Fan guns can often produce more snow and spread it over further distances. They do require a source of energy, however, and can be more costly to buy.

The Costs of Making Snow

While it would be lovely if making snow was free, that’s certainly not the case. There are many costs involved with creating artificial snow. You have to purchase the guns, ensure you have a water supply, as well as an electrical source of some kind.

You also have to pay staff to maintain the machines, or install automation, which can be quite expensive.

All in all, the costs for a resort will depend on things like the terrain, how much snow is needed, the temperature in the area, and the technology being used.

In many cases, ski resorts can pay hundreds of thousands, or even millions, of dollars for snow creation in any given year.

Many ski resorts have ample amounts of natural snow provided by mother nature, but some need a little assistance from time to time.

Thankfully, snowmaking has been around for decades and has helped ski resorts all over the world stay open longer.

Hopefully, this guide has been able to help you learn, not only how ski resorts make snow, but also a little more about the costs and the machines that handle the heavy lifting.

Does your local ski resort’s process include a step or method we didn’t mention? If that’s the case, we invite you to let us know in the comment section below.