What is Freeride Skiing? 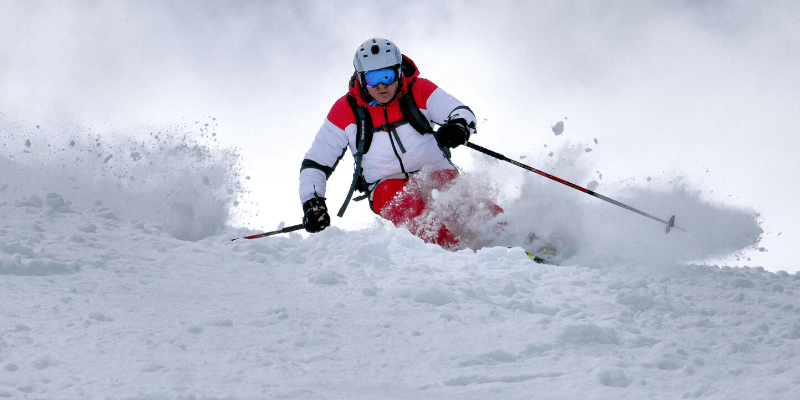 Skiing has come a long way since it first emerged thousands of years ago. In that time, the sport has branched out into many different styles. Though a lot of styles, like park or on-piste, are well-defined and well-known, others are not. Freeride skiing is one of the more obscure.

Freeriding, which refers to skiing off-piste away from a resort, can be quite a bit of fun. Though a bit more risky than other styles, the lack of regulations provides a lot of freedom similar disciplines don’t have. That is why so many choose to freeride around the world.

Freeriding first began in the world of snowboarding, where it still persists to this day. However, in recent years it has become more and more popular with skiers.

At its core, freeriding is a form of off-piste skiing. As such, to fully understand it, we must first break down what off-piste means. Most skiing done at a resort on groomed runs or within clearly defined areas is known as on-piste, while unmarked areas out in nature are known as off-piste.

Piste is a French word that means a groomed trail or slope. On-piste runs tend to be clearly marked and have a set path. Anytime you find yourself going down an ungroomed trail or blank mountainside, you’re going off-piste.

There are many types of off-piste skiing out there, including sidecountry skiing, backcountry skiing, split boarding, and ski touring. Freeride skiing fits into that family because it takes place in unmarked areas where you need to forge your own way. While it won’t bring you as far out into the countryside as touring or mountaineering, you want to prepare yourself for a whole new environment. In fact, that’s part of the fun.

A Good Place to Start

Freeride skiing is a style that occurs on natural, un-groomed terrain. There are no markers, man-made obstacles (such as jumps), or rules. It is just you and the mountain.

When freeriding, you typically start at a ski resort or similar location. However, that is not a concrete rule. In fact, there are many great freeride areas in remote locations where you would never expect, such as just off the side of the road. There’s nothing wrong with parking by a good spot and just heading out. Remember, the discipline is all about freedom.

Some freeriders may use lifts to get up the mountain and then hike the rest of the way, while others may simply trek the entire trip. This largely depends on how far away the spot you want to hit is, as well as how much energy you want to exert going uphill. Remember, even a short hike can be tough in all your gear. Never spend too much energy going up the mountain, or you won’t have any for the ride back down.

As the name suggests, freeriding is all about freedom. Your goal is to get out onto unmarked runs and pave whatever path you can find. That’s an incredibly exhilarating experience, but it isn’t for everyone. In fact, there are a few things you need to keep in mind before going off-piste.

First, be aware of your own skiing ability. In order to freeride you need to be a skilled skier who has experience on uncharted runs. The discipline often takes you into unpatrolled and unregulated areas. If you don’t know what you’re doing, it can lead to some serious problems. Never get too cocky.

On that note, you should never try to freeride by yourself. No matter how experienced you are or how long you’ve been skiing, you never know what’s going to happen. Newer freeriders can hire a guide, while even the most advanced freeride skiers should at least venture out with a friend. That ensures there’s someone else to help you in case of an accident. They can watch out for potential dangers as well.

Freeriders need to be extremely aware of avalanches, as advised by the founder of Skigulmarg.com, Yanik Turgeon, who’s been skiing the Himalaya for years.

Backcountry and freeride skiers account for nearly all avalanche-related deaths each year. Do not ever let your guard down or get caught unaware.

When traveling into the backcountry it is incredibly important to have the right equipment should the worst-case scenario occur. That means you want a transceiver, which allows you to be found in case of an avalanche, as well as a probe and shovel. All three of these items help protect you and anyone you’re with.

If you want further protection, you should get a backpack with a built-in avalanche airbag as well as a solid airbag kit. A good cell phone can come in handy, and you need to buy yourself a strong, sturdy helmet.

It is quite easy to avoid such items or think you’re too good for the precautions. However, as covered above, you should never act too good for the mountain. Such items could very well be the difference between life and death.

Freeriding is an extremely rewarding experience, as long as you’re properly prepared. It is not one of the most common skiing styles, but that doesn’t mean it is quite fun. Yes, it’s a lot of work, but that work results in some of the best downhill experiences you will ever have.

If you’re curious about going off-piste but don’t want to tour or mountaineer, freeriding may well be the way to go. It’s a good middle ground that can bring you to some of the most beautiful and remote locations on the mountain. As long as you know what you’re doing and have someone else with you, you’ll have a great time.

Do you freeride? If so, where do you most often go? Let us know in the comments below!