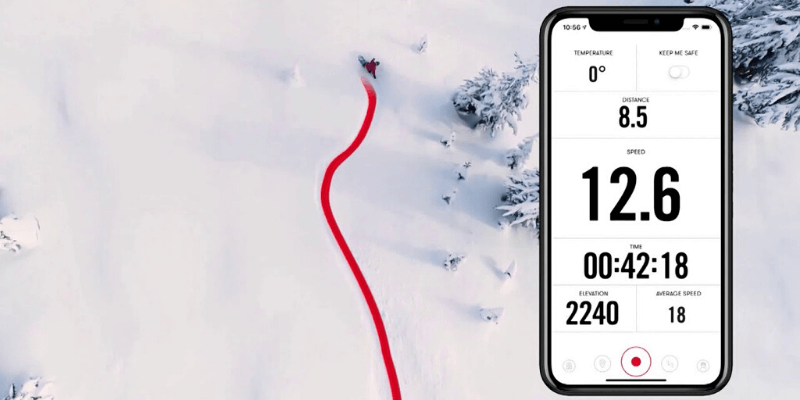 When skiing, it always helps to know you’re going, where you’ve been, and your daily stats. There are a lot of apps that help with that process, but with so many out there, you never truly know which ones work and which ones are a bit lackluster. To help you sift through the chaff and only find the wheat, this article lists some of the best ski tracking apps on the market.

All of the programs listed in this guide track your time on the slopes. However, they each come with a range of other features that make your skiing experience truly special. If you want to bring a technological flair to your average ski run, the following options are for you. 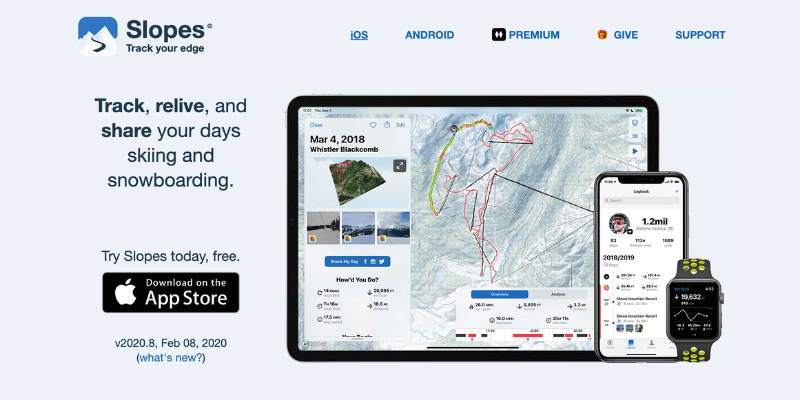 Slopes is a solid all-purpose app that does everything you would expect in a well-rounded tracker. The sleek interface is easy to use, and it utilizes the sensors on your smart device (including Apple Watches) to track both your lift rides and runs. That in itself is great, but it doesn’t stop there.

This app tops our list because, beyond basic tracking, it also records your speed, vertical, and distance traveled. In addition, it has full Siri support for iOS users, meaning you can use it without taking off your gloves and exposing your fingers to the bitter cold.

The data tracking here is easily accessible. It comes with full timelines and stat breakdowns. You can then add even more features, including 3D AR replays, detailed live stats, and premium maps, with the special upgraded version.

If you’re a skier looking to get some serious feedback on your runs, Slopes is the best way to make that happen. The sleek, modern look will also appeal to skiers who enjoy great aesthetics when using their devices. 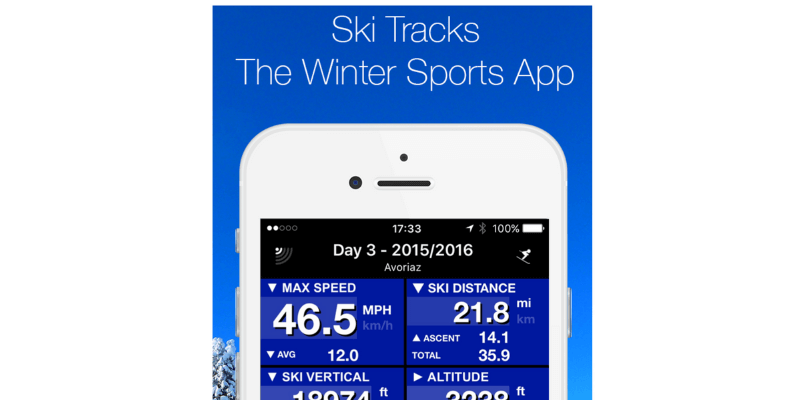 Many ski tracking apps on the market, while useful, can be quite complicated. If you want something without all of the bloat or if you prefer easy-to-use programs with less complicated features, Ski Tracks may well be for you.

This app does exactly what it says it will, which is track your ski runs. It uses your phone’s sensors, including its GPS, to record your time on the mountain. With this, you get a full breakdown of your distance traveled, maximum and average speed, as well as the slope angle. You can also look at your number of runs and total vertical. You can then log that information and plot it on a map.

There’s no muss or fuss with this one, and that’s what makes it so great. Of course, that means it doesn’t come with any of the high-end features you might find in more expensive apps, but at one dollar, it’s hard to get more for the price. 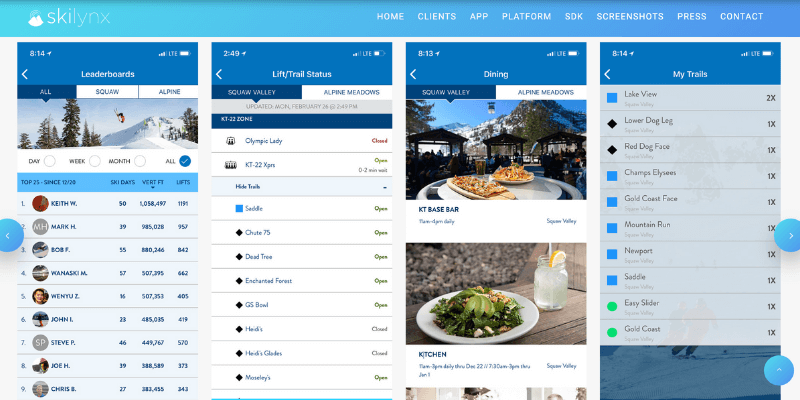 SkiLynx is one of the best choices for people who like to ski together. Available for both smart watches and iPhones, this app doesn’t just track, it helps everyone stay connected with its unique group message system. That feature makes it a great choice for both friends and family.

The interface lets you create a group with one click. From there, you can chat with anyone in the group throughout the day, letting them know where you are or where you’re going to be. It even allows everyone to see where each person in the party is at all times. That makes meeting up much, much easier.

This app also has the ability to know when you’re on a ski lift, which enables it to give you an extremely accurate report on total miles skied. It also provides satellite imagery of your trails, in addition to average speed, max elevation, run distance, vertical drop, and run duration.

That functionality, mixed with the fact that you can easily message and keep track of everyone in your skiing party, makes this a well-rounded app. As a bonus, it’s only three dollars. 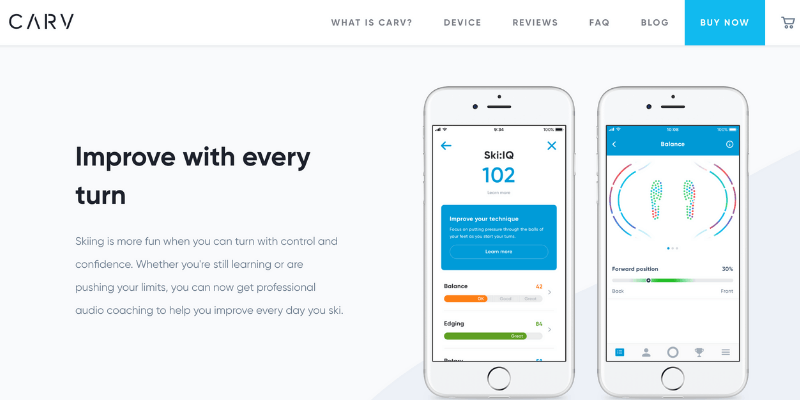 Carv is one of the more advanced options on this list, which makes it a great choice for skiers who need a more complete package. The app has a full set of motion tracking sensors built directly into it, which enables it to do a lot more than similar models.

Of course, Carv has the ability to perform all of the basic functions like tracking your stats and showing you a map of where you rode. However, what sets it apart is that it comes with a crazy amount of in-depth analysis other apps can’t match.

Carv’s sensors enable it to analyze your stance, performance, balance, and pressure. It can even look at your turn symmetry. However, it doesn’t stop there. The program then takes it to the next level by giving you drills, challenges, and recommendations to improve your skiing performance.

This all-in-one design helps Carv function as more of a skiing coach than a traditional app. Though it might be more than most people need or want, if you’re looking for a tracking app that goes above and beyond, this is the one to choose. 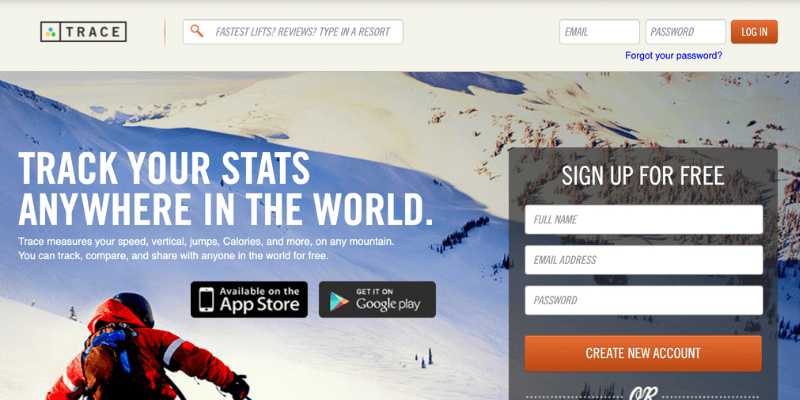 Trace Snow, once known as Alpine Replay, is a good app for skiers who need to keep track of different kinds of terrain. The app uses your phone’s sensors to map both courses and trails, making it extremely versatile.

This app can be used anywhere in the world, making it great for travelers, and it automatically maps your route while you’re on the slopes. There is even a fun “head to head” feature that allows you to both compare and compete with friends. Arguing over who had the fastest run of the day? Now you can prove it.

In terms of tracking, Trace records airtime, distance traveled, speed, and jumps. Those who care about fitness will also appreciate that it tells you how many calories you’ve burned as well.

There are many ski tracking apps on the market, but only a few go above and beyond the normal stats. The above options provide you excellent tracking, and then give you a plethora of additional features. So much so, that you can’t go wrong no matter which one you choose. At the end of the day, it comes down to your own personal preferences and what you want out of your skiing sessions.

Do you have a favorite ski tracking app? Why do you prefer it over others? Let us know in the comments below!