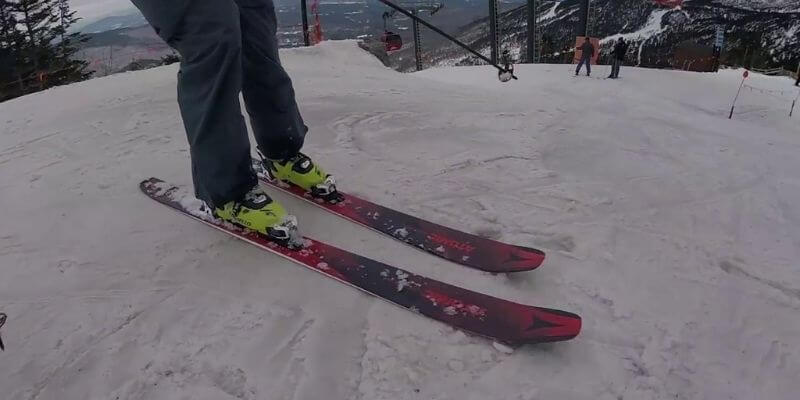 This is my review of the Atomic Backland 107. In my opinion, it is a quality touring ski with plenty of extra benefits.

It’s lightweight but can still handle inbounds conditions where you need a little extra heft. That makes it a good option for backcountry touring skiers who want the versatility to use the ski inbounds if needed.

This light-but-powerful nature sets the skis apart from the rest of the touring niche, but may put off some backcountry purists who want the lightest weight they can get.

I’ve been skiing almost as long as I’ve been able to walk. I have skied all over the world and have decades of experience skiing on, testing, and reviewing different skis and skiing equipment. I conducted heavy research on the Atomic Backland 107 by thoroughly going over its traits, capabilities, and looking at other expert opinions. Below is my detailed review.

The Atomic Backland 107 is best described as a freeride touring ski. That means you get plenty of versatile performance characteristics alongside a lightweight build that can easily get you around in the backcountry. It holds up well in a variety of environments, and the 107mm waist width gives you the ability to bounce around from backcountry powder lines to less ideal conditions at the resort.

Any ski that’s billed as a touring option needs to offer a quality on-snow experience when you’re headed both uphill and back down. The Atomic Backland 107 gives you decent performance in both of these important aspects of backcountry skiing, though its versatility and adaptability keep the skis from having a true focus. That’s ok if you like to spend days in the backcountry and at the resort, but it doesn’t make for a high-end one-ski option.

That said, the Backland is more than capable of getting you uphill. It actually provides better downhill performance than many similar touring options. The skis are still light enough to allow you to strap on skins and hit those long uphill ascents, but they don’t fall into the ultra-lightweight category that some heavy backcountry rippers want. Even so, they ascend with ease.

These skis don’t feature too heavy of a rockered profile, which adds a little bite and grip in situations where you might be side-stepping uphill. You might think that would result in a trade-off in terms of powder performance, but it doesn’t. The shape aids with touring adventures and gives you decent backcountry performance across the board.

The difference between the Atomic Backland 107 and other skis in the backcountry touring category is that these come with a hybrid design. They are fully capable in the backcountry, but can slip in a fixed binding setup at the resort and let you rip all over the mountain. Such freeride capabilities are pretty awesome and make the Backland a versatile pick for skiers who like to explore a little bit of everything.

The Backland excels in powder and softer snow. The 107mm waist is fairly wide for a touring ski, but not quite wide enough to be considered a powder option. Even so, it’s in the sweet spot for adapting to both of those situations. When the snow starts to stack up, these will provide a laid-back surfy feel that’s playful without being sloppy. On huge powder days, you’ll probably want something wider, but these skis can definitely hold their own in deep stuff.

While the Backland is versatile enough to handle changing conditions, it’s not the greatest ski in conditions that are less than ideal. It’s not a ski that adapts well on the fly. You will notice some control loss if you go from soft snow to a crusty stretch. It’s simply not an all-mountain monster that will eat up anything and everything.

The Backland 107 has a powder rocker profile that helps create a dependable and fun feel in deep snow. The profile blends 20 percent rocker in the tip, 10 percent in the tail, and 70 percent underfoot camber for plenty of power and play mixed into a single ski. It’s not heavily rockered like some of my favorite all-mountain or freeride skis, but those specs give the Backland 107 better performance in touring situations.

HRZN Tech is a design feature here that’s also worth mentioning because it helps give the ski more surface area in the tip to allow for better float in deeper snow. That innovation definitely shines when in powder, but doesn’t quite hold up when busting through crud.

The skis have a core made of beech and poplar woods. That gives you strength but keeps everything light enough to be considered a touring ski. The carbon backbone, which runs along the entire length of the Backland, further enhances this light-but-powerful feel. You also get a full sidewall that helps provide control when steering and a durable Atomic base that is both sintered and durable.

In terms of style, these skis subtly stand out. The latest version has a simple top sheet graphic that looks sleek and elegant. You get the bold Atomic logo up on the tip, as well as a dark shading that blends into what looks like a dripping mountain forest scene as you look down towards the tail. Nothing fancy here, but it’s stylish and cool.

These skis sit right in the middle range of what a decent set of touring or freeride skis would cost you. As such, I think they have good value for those who want a versatile option they can take into both the backcountry and use at the resort. If you want a dedicated touring ski, these are not the option and that does knock off some value points. Even so, they are well-built and fun to use in different situations.

My favorite aspect of the Atomic Backland 107 is the way it blends backcountry design elements and excellent freeride characteristics. They are a versatile ski in that regard, and work well for skiers who like to roam and don’t want to be held back by any limitations in shape, construction, or design. These skis are built to go everywhere, which I like a lot.

The Backland 107 also skies well in soft snow and powder conditions. It’s not a dedicated powder ski, but it is surfy and fun in deep snow. This is another great backcountry consideration because when you’re touring, fresh powder lines are often the main allure. You want a ski that will let you seek and destroy those lines. The Backland can definitely do that.

I also like the feel of these skis. When going uphill, they slip and slide without any drag, and make for a capable companion while you’re touring. They feel like a backcountry ski should. In addition, when you lock your heels and turn back downhill, they have plenty of power and response to keep you aggressive and engaged regardless of your ability level.

While the Backland 107 is a good option when it comes to backcountry touring and inbounds situations, it isn’t dedicated or completely focused on any one in particular. While that might not be an issue for freeride skiers who want to go everywhere and anywhere, if you’re a dedicated backcountry skier or want the best freeride capabilities, these skis aren’t quite going to live up to that task.

Another thing I don’t like about these skis is their inability to effectively bust through crust and crud. While they aren’t the worst skis I’ve ever seen in this regard, you will want to stay alert and aware when you dive into a tracked or slushed out line. If you don’t, it’s easy to lose some control. The skis do have power and bite, but they just don’t transition all that well.

I’m also in the camp that you should have separate setups for the backcountry and the resort. While these skis are technically capable of both, they aren’t the best at either. If you’re a skier who demands high performance levels, I don’t think the Backland 107 is going to provide you with that. Sometimes it just doesn’t cut it.

If you’re searching for a good alternative to the Atomic Backland 107, check out these other recommended options:

Are there any major changes in the most recent version of the Atomic Backland 107?
Compared to the previous model year, there aren’t really any significant changes to the skis other than the graphics.

Where should I mount bindings on these skis?
This is somewhat of a personal choice based on your skiing style and ability. If you’re a true free rider, a mounting position close to center can be ideal. With touring considerations in mind, you might want to shift that back towards the tail a bit.

While the Atomic Backland 107 is built to handle a variety of conditions in the backcountry and beyond, it doesn’t quite live up to the standards of a true touring ski. Freeride skiers will like the versatility and lightweight nature, especially when venturing out of bounds, but backcountry purists might have some obvious hesitations. Overall, it’s a quality ski that offers good value if it meets your style.