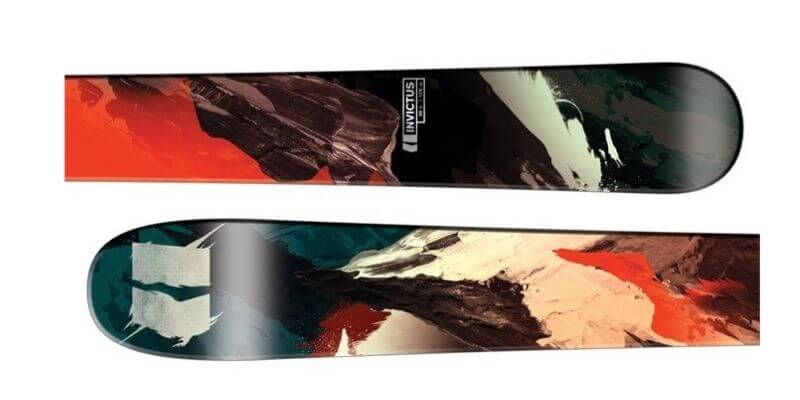 This is my review of Invictus 99ti. In my opinion, it is a versatile all-mountain ski. In the past, Armada has typically leaned more towards park and freeride skis. While the Invictus 99 can still hold its own in those situations, it can roam well beyond them too.

This ski is fun to be on and acts as a hard charger that can serve as an everyday cruiser as well. It’s not as playful as other Armada skis, but if you want power and versatility, this option delivers.

I’ve been skiing almost as long as I’ve been able to walk. I’ve skied all over the world and have decades of experience skiing on, testing, and reviewing different skis and skiing equipment. I spent time heavily researching the Armada Invictus 99ti and have spoken to other expert skiers who have a lot of experience on these skis. Below is my detailed review.

Versatile, hard-charging, powerful, and responsive. That’s a good description of the Armada Invictus 99ti and shows why it’s an excellent solid all-mountain ski. These skis are awesome. There’s not really a better way to say it. If you want all-mountain performance that will get you anywhere on the mountain, and through some nasty transition zones while you’re at it, these skis give you the goods.

The Invictus 99 skis do well at higher speeds and stand above the rest when it comes to staying stable when you really get going. While most twin-tipped skis chatter a bit when you really get cooking, some are far worse than others. The Invictus 99ti holds onto the snow without any wobble when you want a straight line or when you need to carve through fresh corduroy. They perform more like a directional ski in that regard.

These skis have a decent amount of camber underfoot that allows them to bite and grip the snow a bit better than some of the competition. While that definitely hampers their playfulness, it allows you to turn up the dial to 11 and really rip. Whether that’s on hardpack or racing with your friends, you’re going to be more than pleased at how fast you can get these skis before you start to notice any all-mountain drawbacks.

In any other type of situation, these skis can hold their own when you want to go fast. While they are a little narrow, they still give you plenty of float on powder and they eat up crud like nobody’s business. You’ll be hard-pressed to find a better all-mountain option that can go from one condition to the next without even blinking.

The Invictus 99ti stands out across the board when it comes to the all-mountain distinction. The skis can cover all of the mountain. There are some options out there that fall within this category, but they aren’t as versatile as you would want out of a ski that should be able to do anything. No matter what type of skier you are, the Invictus 99’s deliver you reliable and dependable performance time and time again.

I would say their best attributes relating to all-mountain abilities are how well they do at speed, which we’ve discussed in detail above, and what they can do when you’re skiing in less-than-ideal conditions. Let’s face it, just because we all want to ski powder, doesn’t mean we get it every day. When you’re faced with skied out bowls, sketchy hardpack, or other trying conditions, these skis will eat all of it and allow you to keep ripping.

A lot of that has to do with the Invictus 99’s power and strength. That does keep them stiff, which might not be ideal if you are a park or freeride-focused skier, but it’s great for those who like to mob down everything. The Invictus 99ti is one of those skis that actually might require you to keep up with it. That’s a welcome benefit in a niche that sees a lot of competition.

The Invictus line from Armada uses a different construction than a lot of the other models they offer. The Invictus 99ti comes with an AR nose rocker profile that makes them a slightly directional ski and noticeably different than the other Armada twinnies. That keeps enough rocker up front for you to float through powder and navigate crud, while providing solid camber underfoot to generate power and control.

These skis have a full poplar wood core, which makes them strong, stable, and predictable in various conditions. That is then surrounded by laminates of both Intellegrid carbon fiber and titanal. The Intellegrid combines a carbon fiber and Innegra mesh that adds stiffness and keeps vibrations down, while the Titanal layer adds extra weight and strength to tie everything together.

This durable and dependable construction does make the skis stiff. They are on the upper end of stiffness, but as long as you know what you’re getting into, that should not pose any problems. The Invictus also has AR50 sidewalls, 2.2 impact edges, and a comp series base that provides additional stability, strength, and durability.

As far as style goes, these skis look the part. They have a unique top sheet graphic that was designed by artist Joseph Toney, as well as a loose but somewhat psychedelic mountainscape scene that I really like. It almost looks like a skier’s treasure map.

These skis are actually pretty dang affordable. When you consider that alongside their great all-mountain performance, they offer excellent value. One of the better valued all-mountain skis, in my opinion. If you aren’t an experienced skier, they might be a little stiff, which could knock down the value ever so slightly. Even so, they are a great one ski option that truly delivers.

I like just about everything the Armada Invictus 99ti has to offer. Seriously. I don’t say that too often. The only other all-mountain ski of the same caliber would be the Icelantic Nomad 105. However, the Invictus 99ti actually does better at higher speeds. That’s a bit of a tradeoff for playfulness, but that makes it desirable for a lot of skiers. All things considered, these are a favorite that a lot of expert skiers love and recommend.

Another aspect here that I like quite a bit is how well the Invictus 99 does in powder. While I would always choose a wider option for really deep, powder-only days, these are more than capable in the deep stuff. They float and carve easily, especially for a stiffer ski. I was impressed with that trait because I wouldn’t expect it out of a 99. The stability at speed is also awesome.

The crud busting, powerful transitional abilities of these skis is also worth noting. They can plow through everything and give you a ton of fun while doing it. That’s a tall task for any skier to live up to, and these hit the mark. You can literally point them through some chunder that would throw you on your rear with other skis on, but these will keep you in control the entire time.

If I had to list a dislike about the Invictus 99ti, it would be the lack of playfulness. As mentioned above, this is a tradeoff that often occurs when you get a powerful ski with a lot of flex. If I’m being honest, I like a ski that’s a little more playful than the Invictus. If you like to play in the park, freeride flow, or job your way down the mountain, these are going to leave you somewhat underwhelmed.

Alongside this lack of play comes the reality that this is more of a directional ski than some other all-mountain options. While that doesn’t make them bad in any way, it’s going to limit what you’ll be able to pull off skiing switch. Again, if you love to ski switch and spend your days hitting rails and catching air, these skis might not deliver. The directional nature makes them stand out in a lot of ways for the better, but not in terms of playfulness.

While the Armada Invictus 99ti is a great all-mountain ski, there are some other good alternatives out there. Check out these recommended skis if the Invictus isn’t for you.

Does the Armada Invictus 99ti work well in icy conditions?

Yes. In fact, they are one of the better all-mountain options for that because of their traditional camber underfoot and stiff flex that allows for increased edge control.

What lengths are these skis available in?

The Invictus 99ti comes in lengths of 171cm, 179cm, and 187cm. The 187 length has an actual 99mm waist while the smaller lengths have a slightly smaller waist width by 1cm and 2cm, respectively.

Are these skis good for beginners?

No. These skis are powerful, fast, and aggressive by nature. They are far better suited for experienced skiers who can handle ever-changing conditions.

The Armada Invictus 99ti is a highly recommended ski, to say the least. If you want an all-mountain machine that can rip through every sort of condition, these will quickly become your best friend during the winter months. They are also affordable, which makes them even more alluring. They aren’t the most playful all-mountain option out there, but will keep you charging hard and fast anywhere you go.