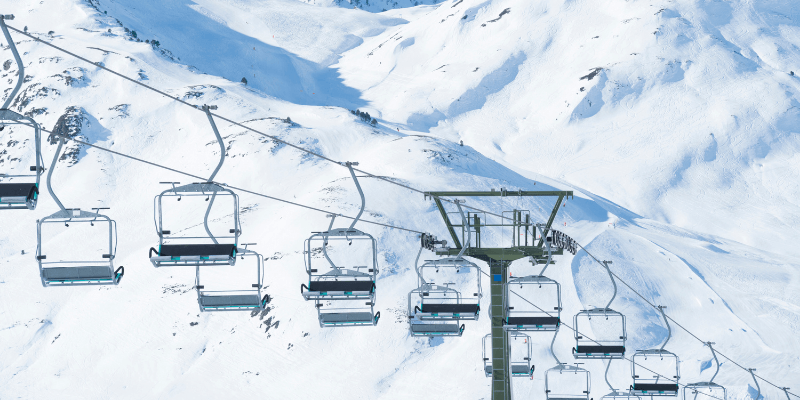 Skiing can certainly be dangerous, but most accidents do not involve ski lifts. Lifts are generally safe, and the risk of getting hurt while riding one is nearly zero. Accidents still happen, but it’s very rare, and you shouldn’t worry about riding the chair lift.

I’ve been on thousands of ski lifts during my decades of experience on the snow. I’ve never personally witnessed a ski lift accident, but I’ve researched to see just how often these can occur.

In this post, I’ll explore some accident statistics involving ski lifts. I’ll highlight some important numbers to help you understand that ski lifts are indeed safe. This is valuable information for anyone concerned about riding a chair lift when skiing.

Any time you go skiing, there is a certain risk involved. It’s kind of like driving your car or doing any other activity involving high risk or potential danger. The high speeds and many obstacles that exist when skiing present dangers.

Every skier needs to understand that you can get injured and even die from a skiing accident. This might sound scary, but it’s simply the truth. People die every year on the slopes, and there is no way to prevent this from happening altogether.

But you can reduce your risk of injury by always wearing a helmet and skiing in control at all times. Safe skiing is essential for you and every other skier on the mountain. The more we all pay attention to this, the safer we will be.

Ski lifts get used by millions of skiers every season, and with the popularity of the sport still increasing, more people are riding lifts than ever before. Accidents involving chairlifts are extremely rare compared to the act of skiing itself.

These lifts are complex mechanical systems inspected daily by lift operators and mechanics to ensure they are functioning correctly before the public can get on them. They are very reliable and safe in the long run.

Some people are scared of ski lifts and think they are dangerous, but this is primarily because of how high they lift you off the ground and not because of any real evidence that points to mechanical failure or people falling off them.

Still, you always want to be safe when getting on a chair lift. If the lift looks old and unmaintained, or there are no lift operators present, you shouldn’t get on one. The chances of this happening are virtually zero, but it’s still good advice.

Even though ski lifts are very safe and accidents seldomly occur, they do happen. And there are two kinds of ski lift accidents to know about: malfunctions and rider error.

Ski lift malfunctions involve some sort of mechanical error that results in an accident. These involve the ski lift breaking in some way that results in injury or death for the skiers riding the lift.

Rider error accidents occur when someone falls off a ski lift because they make a mistake when riding it. They might slip off or get bumped off by another skier on the same lift.

Ski lift accidents are extremely rare. You are more likely to get hurt in an elevator than on the chair lift. But they still happen, and many skiers are curious about the statistics relating to this. So it’s something worth examining in more detail.

The National Ski Areas Association (NSAA) is a US-based group that keeps track of accident statistics relating to ski lifts. According to its most Ski Lift Safety Fact Sheet from 2018, more than 50 million skiers ride ski lifts every season.

The NSAA says that ski lifts have transported skiers nearly 9 billion miles in the last 50 years. With all of this in mind, the annual fatality rate is listed at 0.145 for every 100 million miles traveled on ski lifts.

While that statistic isn’t extremely straightforward, it means that ski lifts are indeed very safe. They are one of the safest forms of transportation in the world, compared to more dangerous means such as cars.

The 0.145 fatalities/100 million miles transported statistic also shakes down to 0.3 passenger deaths per year on ski lifts. That means less than one person dies every year on a ski lift.

Compare this to 1.21 fatalities/100 million miles traveled for automobiles with 37,800 average deaths/year, and you can see how much safer ski lifts are than your car.

When you consider how many people ride ski lifts every season, this means that your chances of dying on a lift are far less than one in a million. But it has happened before and still could occur again in the future.

Over the last 50 years, there have been 115 documented ski lift deaths in North America and Europe. 102 of these were in Europe, and the other 13 occurred in North America. I can’t find good information on why there is such a big difference here.

Ski lift malfunctions in North America have caused 118 skier injuries in the last 50 years. These typically occur when a lift rollback happens or when a chair comes off the metal rope/cable it is attached to.

There have also been three deaths from people falling from chairlifts reported in North America since 2004. A study by the Colorado Passenger Tramway Board found that 86% of falls from lifts are caused by skier error.

Your chances for injury and death increase when you get off the lift and actually start skiing. Keep that in mind the next time you hit the slopes, and always make safety a top priority so you can enjoy the fresh snow, and lots of it, for years to come!