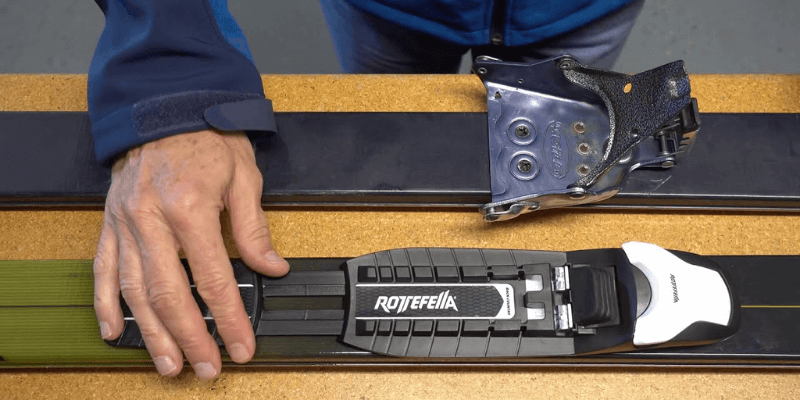 The different types of cross country ski bindings include SNS, NNN, and three-pin. SNS and NNN are far more common these days, but you’ll still see old three-pin styles if you are out on the trails often.

I’m an avid skier with a strong passion for the sport. I’ve tried nearly every skiing style, and I like to cross country ski as often as I can during the winter months. I’ve used all of the different styles of cross country bindings.

This post will show you the different types of cross country ski bindings that are out there. I’ll explain the differences between these binding styles and tell you when and why you might want to use one over the other.

Let’s get on the trail and get started.

Of the three different types of cross country ski bindings, only two are commonly used these days. While you might see three-pin bindings hanging on the lodge at the ski resort or hidden in your basement, you really don’t want to use them.

I’ll still explain the difference between all three styles, but it’s important to realize that you don’t want to use anything but NNN and SNS bindings for nearly every modern cross country skiing situation.

SNS stands for Salomon Nordic System. This is a standard cross country ski binding and boot style developed by Salomon that has been widely used over the last several decades. It’s a common style to see at the trail complex or rental shop.

SNS bindings are the step-in style of binding you have probably noticed if you have cross country skied before. A toe bar built into SNS ski boots allows you to step into the bindings and have it clip in place.

There are both SNS Pilot and SNS Profil styles within the SNS binding category. These are designed to be compatible with corresponding boots, so you need to know which option you have mounted on your skis.

SNS bindings can be used by just about any type of skier based on ability level. They can work on groomed and ungroomed trails and are a standard type of binding.

NNN stands for New Nordic Norm, and these are the most modern cross country ski binding option. If you want the best technology and innovation in Nordic ski boot and binding design, you will to want to go with a NNN option.

NNN bindings are also a step-in-style design that features a toe-bar on compatible ski boots to allow you to quickly and easily step into your skis. The difference is that the NNN toe bar is wider and thicker than the SNS binding.

NNN bindings can work for all ability levels of cross country skiers. They are a bit more expensive than SNS bindings, but both are still very affordable compared to alpine ski bindings. You have more options to choose from in the NNN category than in SNS.

Three-pin style cross country ski bindings are old-school and classic. These bindings have three pins in the toe piece that you step into with a compatible boot. The boot then gets clamped down, and you are ready to start skiing.

This is a traditional style of Nordic ski binding that isn’t commonly used anymore. You might see some old-timers on the trail with these types of bindings, but I don’t recommend that you use them unless you want to be frustrated and challenged.

Three-pin bindings don’t really have any advantages over modern styles. They are heavier, less reliable, and not as durable. They might look kind of cool if you are into classic ski design, but there is no benefit from a performance perspective.

It can be cool to check out a set of old three-pin bindings to see how far ski binding technology has progressed over the years, but there’s no reason to put them on your skis.

How to Pick What Bindings to Use

You can’t go wrong with SNS or NNN style bindings. I like NNN bindings a bit better because you get more options for what specific bindings you want to use, and the technology is more modern than SNS.

SNS can be a little lighter and have a simple design that some skiers prefer. They are also cheaper than NNN, but not by a lot. If cost is the main concern, you’ll probably be better off with SNS options.

SNS, NNN, and three-pin are the three different styles of cross country ski bindings. Of those, SNS and NNN are the only types you’ll actually see on the mountain because three-pin styles are old-school and outdated.

Both SNS and NNN bindings can work for all ability levels and function in various terrains and conditions. If you get a ski boot you like, make sure to match it with a compatible set of bindings.