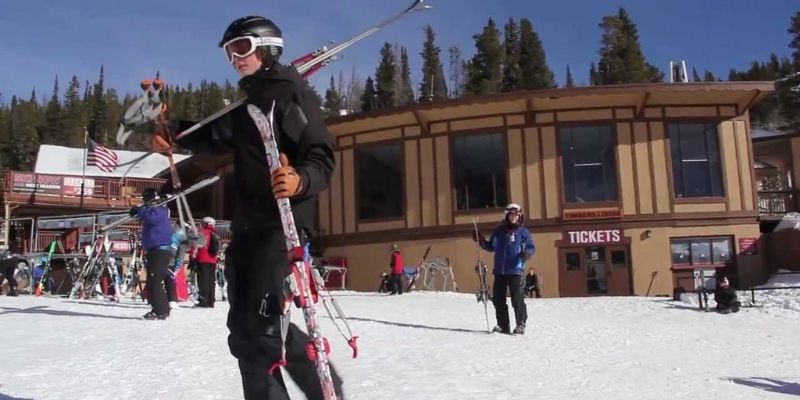 Colorado is well known for having some of the best skiing opportunities in the US, as well as the world. Denver is the largest city in the state, which means it’s home to many people while also having a large international airport that brings in skiers from all over the world.

So, whether you live in the Denver area or are planning on visiting soon, it’s good to know what the closest ski resort is to the city.

While there are many ski resorts fairly close to Denver (within an hour or two) the actual closest is Echo Mountain Ski Resort at right around 60 miles from DIA (the international airport). The second closest is Eldora at 66 miles from DIA. I mention those two here because, as you’ll see below, they have some unique characteristics you should know about before going.

Echo Mountain is the closest ski resort to Denver based both on drive time and actual distance. It is 60.8 miles from DIA to the resort and will take you 70 to 90 minutes to get there depending on both traffic and weather. While that makes for easy access, Echo Mountain is not a traditional ski resort like you might be accustomed to. It has a few quirks we should cover before you decide to go.

The first thing to know about Echo Mountain is that it only has 1 chair lift. It’s a small ski area and the closest skiing you’ll find near Denver, but it’s not quite a ‘resort’ as you might envision it. It can be a great option if you’re just learning how to ski or want to get on the snow during a quick trip to Denver, but you won’t find consistent powder and varied terrain. It’s pretty tiny and more of a novel ski area than anything else.

Echo is affordable and does have night skiing, both of which make it a lot of fun if you’re itching to get on the snow or have limited time in the area and can’t make a trip to a further destination. It also doesn’t always have enough snow to stay open, even in the winter. As such, even if you’re on a quick trip, it’s no guarantee that you’ll be able to ski there.

Eldora is another ski resort that’s close to Denver and it’s worth exploring because it offers more skiable terrain within a similar distance to the airport. Eldora is 66 miles from DIA and is easy to get to. In fact, you can be to the base of the slopes within about 90 minutes of leaving the airport. It’s on the Front Range of Colorado and fairly close to the city of Boulder.

Eldora has 10 lifts that service a varied amount of terrain including beginner, intermediate, and advanced runs. Even so, it’s still a small resort compared to others found in the state. Being so close to the city, Eldora can get crowded and, due to its small size, it doesn’t hold a crowd all that well. In addition, being on the front range it has a lower elevation so it doesn’t get as much snow as higher up resorts.

The resort is a great place to ski and have some fun if you’re in the Denver area and want a quick trip. Especially if you go on a snow day, the resort offers a great experience and is worth checking out. Just know it doesn’t have a ton of beginner terrain. If you’re just learning, you might have to deal with crowds while you are skiing.

3. Loveland (Best Skiing for a Ski Resort Close to Denver)

While the other two above options can make for a fun and quick ski day, they won’t give you great terrain and often don’t have the best snow. That’s why you should know about another ski resort that’s still close to Denver but has much more to offer than the truly closest options. Loveland Ski Resort is a favorite of mine and actually my hometown mountain where I learned to ski.

Loveland is 82 miles from DIA, which is a little further than the other two options listed above, but because the resort sits right along Interstate 70, you can still get from the airport to the slopes in right around 90 minutes with good traffic. Upon arrival, you’ll be at the doorstep of the continental divide, and at one of my favorite ski resorts in the state of Colorado.

Loveland is another ski resort that is on the smaller side, but unlike the two closer resorts, it has a higher elevation. That means more consistent snowfall and a lot more powder. The resort has 1800 skiable acres with another 100 acres of terrain accessible through hiking. It has nine lifts of different sizes to access this terrain and a good mixture of runs for all different ability levels.

If you want to visit a ski resort close to Denver that will give you the best chance for a powder day while also offering some really fun terrain and amazing views of the Rockies, you can’t do better than Loveland. I’m a little biased because this is where I learned to ski, but even though it’s not technically the closest ski resort to Denver, I would recommend it over the others on this list due to the general quality.

Denver is a great city to live in or visit if you like to ski. The three options you’ll find here are the closest ski resorts to the city. If you want to get on the snow in right around an hour after coming to town, you have options. If you want some truly great skiing that’s still close to the city, that can also be found just a little bit farther up into the mountains.

Do you like to ski in Colorado? Where do you go most often and why? Let us know below!